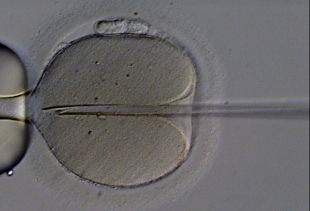 Intracytoplasmic sperm injection of a human oocyteWIKIMEDIA, EUGENE ERMOLOVICHOffspring conceived by in vitro fertilization (IVF) are more likely to be male than female. Now, a team led by Jianhui Tian of China Agricultural University in Beijing has found that problems with X chromosome inactivation, the process of silencing one of the female embryo’s X chromosomes, is responsible for much of this sex-ratio skew in mice. The team also demonstrated a method of reversing the male-dominant ratio by modifying the culture that murine preimplantation IVF embryos are grown in. The team’s results were published in PNAS today (March 7).

Paulo Rinaudo, a reproductive endocrinologist with the University of California, San Francisco, who was not involved in the study, noted that researchers previously suspected X chromosome inactivation played some role in this phenomenon. “The authors did a great job in going after a mechanism,” Rinaoudo wrote in an...

In the U.S., around 1.5 percent of newborns are conceived via IVF. Elsewhere, the rate of IVF-conceived babies is as high as 4 percent. The assisted reproductive technology is also extensively used in cow, pig, and other livestock breeding programs, where researchers began documenting the skew toward male offspring in the early 1990s. In the past decade, a similar sex ratio has been found among human IVF embryos, but supporting evidence for the imbalance was inconsistent.

When they compared X chromosome imprinting in IVF and normally conceived mouse embryos, Tian and colleagues found that expression of Xist and ring finger protein 12 (Rnf12) appeared to affect X chromosome inactivation. Xist, a noncoding RNA, coats the inactive X chromosome. Rnf12, meanwhile, is an upstream regulator of Xist. Expression of both Xist and Rnf12 was impaired in female IVF embroys, but not males ones. The researchers were able to rescue Xist expression by experimentally upregulating Rnf12 expression.

“Our study not only identifies the mechanism underlying the female-biased pregnancy loss and subsequent sex skewing in in vitro fertilized offspring, [it] also resolves the IVF-induced sex skewing via targeted improving the culture system of IVF process,” Tian wrote in an email. The results, Tian added, provide “a roadmap for exploring the mechanism of IVF-associated health complications.”

“A broader issue is if assisted reproductive technology like IVF altering this really fundamental process. Is epigenetic remodeling affected by IVF?” asked David Keefe of the New York University Langone Medical Center who was not involved in this study. “This is the tip of the iceberg, the altered sex skewing.”

“This is another reason why we have to be very careful about what we do in the IVF lab,” said Kristin Bendikson of University of Southern California who was not involved in the study. She was particularly struck by the team’s findings on preimplantation IVF embryo culture conditions. “It must give everyone pause that what we do in the lab can ultimately impact the genetics of the embryo,” Bendickson said. “That is a very important take-home lesson.”

It remains to be seen whether the study’s findings will hold up in humans. “All species don’t work the same,” Bendickson noted. “We need to be cautious about how we utilize this and translate this into human data.”