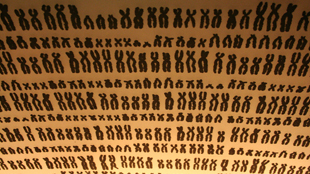 FLICKR, COLM MCMULLANThe most accurate sequencing of the X chromosome to date has revealed that the sex chromosome, thought to be the most stable of all the chromosomes, is loaded with regions of rapidly evolving genes. Even more surprising, the chromosome, considered to the female counterpart of the male-associated Y chromosome, may play a role in male infertility and sperm production. The findings are reported today (July 21) in Nature Genetics.

“The big surprise is that the X chromosome in both humans and mice has been evolving towards a kind of male specialization,” said senior author David Page, a geneticist at the Whitehead Institute at the Massachusetts Institute of Technology. “This flies in the face of a deep-seated, even if not scientifically substantiated, view that the X chromosome is female leaning.”

Page’s team initiated a study of the X chromosome as a means to test a prediction...

To test Ohno’s Law, the researchers performed a systematic comparison of mouse and human X chromosomes. However, before a valid comparison could be made, the researchers re-sequenced the existing human X chromosome assembly, a patchwork of genetic material from at least 16 individuals. The main concern with the existing reference was that so-called ampliconic regions of the chromosome—long, palindromic regions full of nearly perfect mirror-image copies of genetic sequences—might have been misassembled.

Page’s group used a sequencing approach for the X chromosome called single haplotype iterative mapping and sequencing (SHIMS)—a painstaking technique that the group had pioneered for sequencing the human Y chromosome. “[SHIMS] is uniquely designed to recover palindromic regions that are almost identical,” said Andrew Clark, a population geneticist at Cornell University, who was not involved in the study. “It requires very careful sequencing and very careful mapping to see how they go back together again.”

Comparisons of the SHIMS-acquired human X chromosome reference with that of the mouse revealed a 95 percent match in the two species for X-linked single copy, or non-palindromic, genes. However, the researchers identified 340 genes—representing approximately 20 percent of the total genes, including palindromic ones, on the X chromosome—that were not shared. The majority of those unique genes were found to reside in ampliconic regions. Similarly, Page’s team had previously discovered that most of the rapidly evolving genes on the Y chromosome were located in ampliconic regions.

The researchers were able to determine that lineage-specific gene loss and ancestral X-linked gene duplication accounted for some of the differences between the mouse and human ampliconic regions, but the majority of the unique genes arose de novo on the X chromosome. They therefore concluded that nearly 10 percent of the total genes on the human X chromosome, and 16 percent in mice, have been acquired independently in the 80 to 100 million years since the species diverged from a common ancestor—a clear violation of Ohno’s Law.

“Page and his group demonstrate the two genomic mechanisms used to successfully maintain the sex chromosomes at the opposite extremes of conservation: rigid maintenance of genes on the X—Ohno's Law—combined with incredibly rapid adaptive change by the creation of ampliconic gene families on both the X and the Y,” said Huntington Willard, a geneticist at Duke University who was not involved in the study, in an email. “Someday, this is destined to become, I guess, ‘Page’s Law.’”

RNA sequencing analysis indicates that nearly all of the newly discovered X-chromosome genes are expressed in males, but not females, and predominantly in the testes. So far, no X-linked phenotypes have been attributed to the new genes on the human X chromosome. However, according to Page, the localization of these X-linked genes to the testes may be related to loss-of-function mutations that impact reproduction, as is the case with similar types of genes on the Y chromosome. “The dynamism of these regions could underlie significant medical conditions such as infertility, poor sperm production, and even [testicular] cancer,” he said.