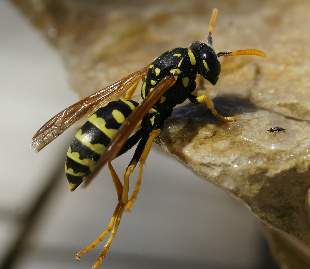 Polistes dominulaWIKIMEDIA, HANS HILLEWAERTThe domestic yeast Saccharomyces cerevisiae, a model organism in genetic research, is surprisingly poorly understood outside the lab. In particular, researchers have struggled to explain genomic data suggesting that S. cerevisiae outcrosses regularly in the wild, given the apparent absence of natural environments favoring the species’ sexual reproduction. Researchers at the University of Florence have now identified at least one place where outcrossing is occurring regularly in the wild: within wasp guts. The team’s findings were published in PNAS today (January 18).

“Despite the evidence for frequent outcrossing, derived from the sequences of yeast genomes, no one knew before where outcrossing could take place,” said study coauthor Duccio Cavalieri, an associate professor of biology at the University of Florence.

Earlier work had shown that both pure and hybrid strains of S. cerevisiae could survive the guts of hibernating Polistes dominula wasps, and that these...

To find out, Cavalieri’s team fed lab wasps five S. cerevisiae strains. The researchers then compared the proportion of outbred strains in the wasps’ guts following hibernation to the proportions in control populations grown either in sterilized wine must (pressed grapes) or in lab conditions that favor mating.

After two months of wasp hibernation, one-third of the gut’s yeast population was outcrossed (slightly greater than the proportion in wine must), confirming that yeast can indeed mate within the P. dominula digestive tract. After four months, outbred strains had increased to 90 percent of the population—greater than the percentage in even the most favorable lab-growing conditions.

“[It’s] surprising that there’s so much sexual action going on in the gut of these insects,” said Kevin Verstrepen of the University of Leuven and the Flanders Institute of Biotechnology, both in Belgium, who was not involved in the work. “We knew that [S. cerevisiae] could survive the gut environment. . . . What we didn’t know is that they’re actually really going through the complete cycle.”

The authors suggested that the intestine’s progressively increasing pH from anterior to posterior provides a particularly favorable environment for the sporulation-germination cycles required for yeast outcrossing. According to evolutionary biologist Molly Burke of Oregon State University, the explanation is a convincing one.

“In a way, it’s intuitive to think that outcrossing and sporulation would be fostered by the stressful environment of a gut,” said Burke, who was not involved in the study. “That’s how we get [yeasts] to have sex in the lab—we stress them.”

For some yeasts, the wasp gut may be doing more than fostering outcrossing. In a second set of experiments, the researchers showed that two strains of domestic yeast’s wild cousin, S. paradoxus, could not even survive the gut without hybridizing with S. cerevisiae.

“In a very elegant way, [this] provides evidence for a mechanism by which outcrossing in yeast can be advantageous in an evolutionary sense,” Burke told The Scientist.

Just how much these wasps drive the generation of diversity in yeast populations is a question Cavalieri’s team plans to investigate further. Another key question, he noted, is whether wasps benefit from storing yeast during hibernation.

The research could also be extended to ecosystems where wasps are less prominent—like forests—and to other yeasts, noted Primrose Boynton of the Max Planck Institute for Evolutionary Biology in Germany who was not involved in the work. “The study suggests that S. cerevisiae is specialized for the wasp habitat,” said Boynton. “So what about other yeasts? Are they associating with other insects?”

Meanwhile, the finding that wasp guts promote outcrossing in S. cerevisiae is of relevance to food and drink production, which relies heavily on hybrid yeast strains, explained Verstrepen. He suggested that researchers might look to wasps to create new hybrid strains for industrial use.

“It sounds quite exotic, but it isn’t,” he said. “Maybe we’d be able to get a few species that we are not able to get in the lab—because, of course, it’s hard to really imitate the gut of an insect.”