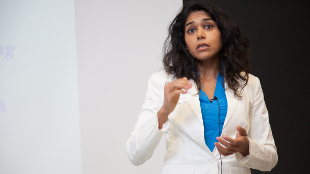 Jasdeep Saggar in full flow at 3MT OntarioCHI YAN LAM, QUEEN'S UNIVERSITYWith a giant digital clock counting down the seconds, 30 graduate students last week (18 April) nervously took the stage at Queen’s University in Kingston, Ontario, to explain their research to a panel of non-specialist judges in just 3 minutes. It was the final of the Ontario Three-Minute Thesis (3MT) contest, the culmination of a province-wide competition in which hundreds of early career researchers presented complex research to a lay audience in an accessible and engaging way—with a single slide and only 180 seconds.

“It was exhilarating,” said Jasdeep Saggar, a PhD candidate at the University of Toronto who took first prize—and CA$1,000—for her talk on chemotherapy and hypoxia-activated pro-drugs in the breast cancer tumor microenvironment. “I was nervous, because it was a packed house, but this was my moment to talk about almost 5 years of...

Originally developed by the University of Queensland in Australia, 3MT aims to promote communication across research disciplines and help young academics develop skills to effectively share their work with a broad audience. For the scientists competing, the hope is that such skills will help them advance their careers, as well as prepare them to better communicate their work to the public. But some scientists who share those same goals argue that 3MT is not the best way to achieve them, largely because it offers little training for researchers who are not natural communicators.

For Saggar, who already had a strong interest in science outreach, events like 3MT are great way to encourage scientists to translate their work for public consumption. “It’s important to put the message out there that scientists are willing to communicate the value of their research to the public,” she said, “but also to show that even complex ideas can be explained in an accessible way.”

The 3MT competition is also great training for young researchers, said Peter Gooch, senior director of policy and analysis at the Council of Ontario Universities, who was on the panel of judges—alongside a labor lawyer, an economist, and a musician—at the recent 3MT final in Kingston.

“The competition is spectacularly good professional development for graduate students,” said Gooch. “In almost any context these students end up working in, they’re going to need this skill of being able to translate the importance and relevance of their work for people don’t have the same specialist knowledge.”

Indeed, although Chau-Minh Phan, a PhD student at the University of Waterloo who took third place for his talk on using nanoparticles to embed drugs in contact lenses, initially entered 3MT to compete with his colleagues, he “realized it was a great opportunity to strengthen my communications skills, which is not usually part of the training process for scientists.”

But not all science outreach advocates are convinced. David Kent, a Canadian postdoc currently studying stem cell biology at Cambridge University in the U.K. and an long-time supporter of outreach activities, pointed out that although 3MT identifies good communicators and gives them a platform, it does not always offer training. Indeed, while some participating schools offer 3MT-related workshops, others do not, according to Colette Steer of Queen’s University School of Graduate Studies, one of the organizers of the 3MT provincial finals.

“The benefit of 3MT is that scientists who can already communicate get an opportunity to do so, and get feedback,” said Kent. “That’s not a bad thing, but it’s not the same as teaching them how to communicate.”

Kent also argues that there should be some sort of screening for the quality of the research presented and the accuracy of the presentation itself. Without that sort of quality control, he said, 3MT places too much emphasis on style over substance, and could end up misleading the public.

Nevertheless, Kent doesn’t believe the idea behind 3MT is fundamentally flawed. “I’ve got no problem with condensing concise thoughts into 3 minutes, and I think all researchers would benefit from learning how to do that,” he said. “I just don’t think 3MT teaches you how to do that.” The competition would be more useful if courses and workshops were always part of the program, he added.

Despite such reservations, 3MT Ontario winner Saggar is in no doubt that competing was a worthwhile exercise. “If you can distill your research to the point where someone says ‘you know, I actually get that now and it’s pretty cool,’ then you’ve accomplished something,” she said. “These are useful skills.”