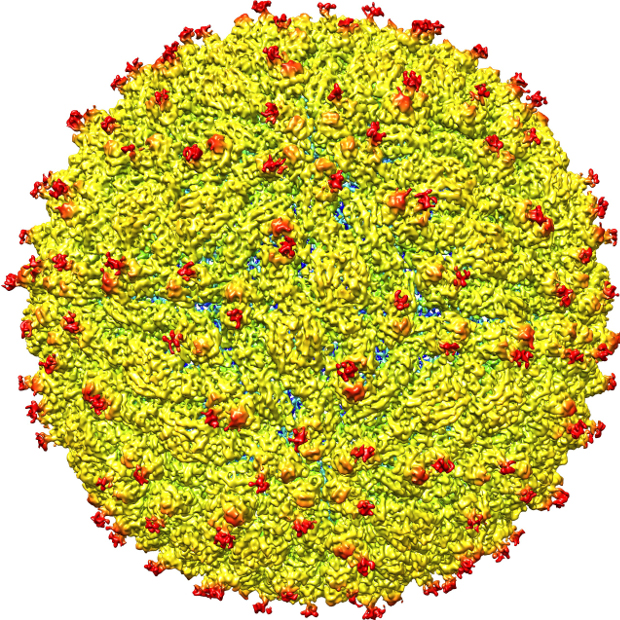 Representation of the surface of Zika virus based on cryo-elecron microscopy structure.KUHN, ROSSMANN RESEARCH GROUPS, PURDUE UNIVERSITYAs concerns over the spread of Zika virus through the Americas rise, and evidence showing that the virus can infect developing neurons accumulates, a team led by researchers at Purdue University has now described the first high-resolution structure of the mosquito-borne flavivirus. Their work highlights a glycosylation site surrounding a unique stretch of 10 amino acids within Zika’s envelope protein, which differs from those of related flaviviruses dengue and West Nile. The team’s results were published today (March 31) in Science.

The mature Zika virion consists of an RNA genome enclosed in a casing of 180 repeated units of an envelope glycoprotein and membrane protein layer on top of a lipid membrane. Using cryo-electron microscopy, Purdue’s Michael Rossmann, Richard Kuhn, and colleagues produced a 3.8 angstrom (Å) resolution map of...

“That the team was able to attain a high resolution structure for a virus of this size and complexity is really beautiful,” said Eddy Arnold, a biochemist at Rutgers University who was not involved with the work. “It is difficult to crystallize an enveloped virus that has a lipid membrane.”

“Remarkably, there are some atomic level differences at a glycan site among these [flaviviruses], which has implications for the different infections these viruses cause,” Z. Hong Zhou, a microbiologist at the University of California, Los Angeles, who was also not involved in the work, wrote in an email to The Scientist.

Unsurprisingly, the overall structure of the virion—isolated from a patient infected during a 2013 epidemic in French Polynesia—resembles that of the dengue and West Nile viruses. A key difference in the Zika virion is a short region around an asparagine at a glycosylation site on the envelope protein where a sugar molecule is attached. Appendage carbohydrates on the dengue and West Nile viruses have been previously shown to provide specificity for certain cell types, allowing viral attachment to the host cell surface.

This region of the protein may be important for interacting with host attachment factors that could dictate Zika’s apparent preference for certain host cell types, the researchers proposed in their paper.

“[This structure] will ultimately be important for efforts to find small molecules and antibodies with inhibitory activity against the virus,” said Michael Diamond, who studies Zika virus at the Washington University School of Medicine in St. Louis but was not involved with the study.

The detailed structure could help guide scientists performing site-directed mutagenesis on the viral genome to test whether changes at this site might attenuate the pathogenicity or ability of the virus to cause an infection of specific cell types, Diamond added.

“Now that we have the structure, there is a lot of work that we can start directed towards developing [prophylactic] vaccines and antiviral compounds and antibodies,” Rossmann told The Scientist.