Perhaps you're a bright, freshly minted PhD looking for solid advice on whether to plunge into the world of postdocs, or look for a job elsewhere. Or, you're completing a first or second stint as a postdoc and want to move onward and upward. Or maybe you're a principal investigator anxious to provide the best possible environment and attract the best research talent. Or, you're an institution manager, looking to measure where you stand in keeping your postdoc community happy. Look no further.

Our 2006 Best Places to Work for Postdocs survey is published in this issue, starting on page 53. The survey was completed by almost 3,000 postdocs at 114 institutions worldwide. It ranks institutions on the postdoc experience and catalogs the issues that matter most to the up-and-coming generation of scientists.

Having read the open comments in this survey and compared it with the first one of my tenure at The Scientist in 2003, I'd say that things are getting better for postdocs. But slowly, too slowly.

The attractions remain: scientific adventure, intellectual freedom, work flexibility, interaction with esteemed researchers, and a collegial environment. But the perennial turn-offs loom large: the unknowable future, the lousy compensation and benefits, the grueling hours. What's different between 2003 and 2006 is that these problems seemed overwhelming three years ago, and it now looks like some of them are being tackled, albeit in a piecemeal fashion. See the survey for details.

The impact of all this? According to the study, "almost half of respondents reported that withholding had had a negative effect on the quality of their relationships with other academic scientists; a third reported a negative effect on the quality of the education they had received; and a quarter reported a negative impact on the level of communication in their lab or research group." It is the first study of its type, so it is not clear what the trend is over recent years.

The other bleak news for US life scientists is the freezing of the 2007 NIH budget at 2006 levels. This is the fourth consecutive year that NIH funding has failed to keep pace with the rate of biomedical inflation, leaving us 10% below where we were in 2003 in terms of inflation-adjusted dollars. And, the likelihood is that there's still more pain to come.

Bad as that is, it's the possible decline in openness and the sharing of data in the life sciences that really worries me. It will take much longer to reverse. It will delay research, hamper training, and erode the culture of the academic scientific enterprise that we hold so dear.

But I'm optimistic. After all, it's postdocs who are our future, and as things improve for them, they'll improve for science at large. 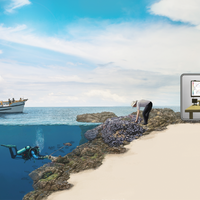