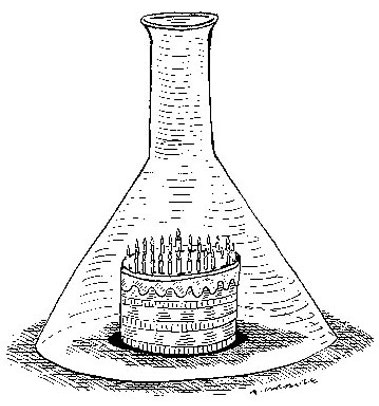 The Scientist debuted as a 32-page newspaper in October 1986, and quickly came to occupy a special niche in the science world. Eugene Garfield, publishing entrepreneur and founder of the Institute for Scientific Information (including Current Contents, the citation index, and the impact factor), launched the publication to disseminate information that he passionately believed was as important to scientists as what they read in research journals: news, opinions, and interviews about funding, ethics, politics, and other career-related issues, plus profiles, book reviews, and even pithy quotes.

Twenty-five years later, Editor Emeritus Garfield reflects on the not-so-easy birth and nurturing of the publication as a labor of love in "Alive and Kicking." Recalling how The Scientist grew and changed over time, he proudly touts the magazine as “the first full-text science publication to be available for free on the web.”

To commemorate our anniversary, this issue focuses...

It is clear that the same topics found in our inaugural issue are still of interest to today’s scienceprofessionals.

Two of these researchers were very early contributors to The Scientist: Walter Bodmer, who introduces the special section in "Looking Back, Looking Forward," wrote an opinion piece for the inaugural issue urging that the human genome be sequenced. And Edward O. Wilson contributed a personal reflection, “Discovering Ant Language,” to the second issue. Wilson writes here about why it is so important to catalog Earth’s species in "Exploring a Little-Known Planet." (In "Conserving Our Shared Heritage," conservation biologist Thomas Lovejoy argues that “reversing catastrophic threats to our planet’s biodiversity is not optional.” )

Eric Kandel reminisces about his 50 years in neuro­science—today a wildly popular research field—describing the risks he took by choosing to study memory in such a simple organism as the sea slug in "Speaking of Memory." Another area that has gone viral, thanks to innovative advances, is omics. Cambridge Health Institute’s “Omes and Omics Glossary” contains multiple entries, running from allergenomics to viromics, skipping only the letters j, q, w, y, and z. In "Thinking Outside the Genome" Stephen Friend writes about how information derived from the omics data explosion will “change our patterns of living.”

Synthetic biology wasn’t on the radar in 1986, but is a burgeoning field today. George Church and J. Craig Venter describe what they foresee as the applications that will arise from employing syn-bio techniques in "Evolving Engineering" and "Synthesizing Life." Chad Mirkin does the same for the relatively young field of nanomedicine, predicting that “nanotechnology is poised to completely transform the practice of medicine.”

And all fields, of course, both fledgling and venerable, rely on a healthy influx of money to support their research. The state of science funding, an issue regularly covered by The Scientist from the very first issue, today has an eerie déjà vu feeling as budget cuts threaten programs across the board. Mary Woolley of Research!America calls on scientists to “stand and fight” for robust funding of scientific research in "Research and Debt Reduction."

Reflecting on The Scientist’s past, it is clear that the same topics found in its inaugural issue are still of interest to today’s science professionals. The enormous increase in data over the last 25 years has led to a new appreciation of the complexity of how life carries on—both at the cellular and organismal levels, and on Earth itself. Thus, we remain dedicated to spotlighting research news; publishing scientist-written articles that explain complex topics in jargon-free language; profiling both established and young researchers; covering innovative lab tools and the biotech industry; and addressing the issues faced by scientists over the course of their careers.

In 1993 geneticist Mario Capecchi offered this opinion of the magazine: “We, as scientists, are a funny breed of animal. The Scientist helps us keep a balanced perspective on our attributes as well as our follies.”

We plan to continue in the same vein.