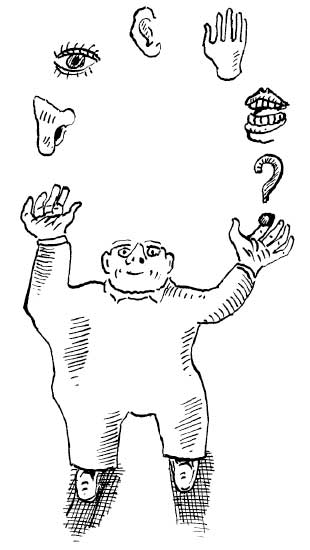 ANDRZEJ KRAUZEHaving devoted one issue per year to each of the five basic senses—taste, touch, smell, sight, and hearing—herein you have the something “extra” I promised in my September 2015 editorial: an issue that examines senses beyond those basic five. But how many “extra” senses are there, really?

Tongues, fingers, noses, eyes, and ears are obvious gatherers of sensory information. But other sensory systems are more subtle. Our first feature describes the current state of research on a sense that offers few external clues about how it functions. Proprioception, often referred to as the sixth sense, allows us to process where our limbs are in space and in relation to each other so we can coordinate their movements. “While we have learned a lot in recent years about the periph­eral signals responsible for the senses of limb position and move­ment, the...

The human body also contains sensory receptors where you would never expect them. It seems fantastical to say that skin, kidneys, muscles, and even sperm can smell; that light-sensitive pigments in blood vessels can make those vessels relax; that taste receptors in our guts can go “yuck” to pathogens and bacteria. But there’s no nonsense involved in freelancer Sandeep Ravindran’s feature article about seemingly out-of-place sensory receptors, and there may be potential therapeutic benefit from researching such unexpected physiological phenomena. One researcher Ravindran interviewed touted an advantage of activating taste receptors to stimulate a person’s immune cells: “you wouldn’t expect to get drug-resistant bacteria.”

Because many members of the animal kingdom can perceive sensory signals humans can’t (but often wish they could), we also decided to take a look at nonhuman sensory apparatuses, some of which, like the hair cells of the fish lateral line system, are precursors of human cell types. A staff-written feature reports on some of these sensory organs and the responsible anatomy. We offer a whole universe of sensations beyond what humans experience: electro-, magneto-, thermo-, and mechanoreception (via the lateral line), and gravity detection by invertebrates, some of which, like the comb jellies, don’t even have a nervous system.

In the future, researchers armed with a deeper understanding of these (to us) exotic animal senses may be able to enhance the human sensory repertory, writes hearing researcher Bernd Fritzsch in a Thought Experiment, “Acquiring Extra Senses.”

Other articles in this “extra-sensory” issue include two Notebooks: one on a wearable smart skin that integrates touch, temperature, and magnetic-field sensors, and the other on finding olfactory sensors on a sphinx moth’s proboscis, not just in the usual spots on the insect’s antennae. All three articles in The Literature section report on recent papers involving unusual sensing mechanisms: polarized light perception by orchid bee ocelli (three simple eyes on the top of the head), humidity sensing by insects, and pH sensing in the vertebrate central nervous system. And a profile of UCLA neurobiologist Dean Buonomano recounts his lifelong dedication to figuring out how the brain senses time. A Foundations article delves into early studies (and subsequent debunking) of a different kind of extra sense: ESP.

One day, science may endow us humans with more senses than we currently employ to interface with our world. But for now, sit back and enjoy what your eyes already allow you to do: read this beautiful issue.