Politicians should of course consider and respect the latest research findings in crafting policy, but elected officials should honor the scientific method by letting its practitioners hash out the details of the science.

I am relieved to write that I have, as of mid-April, been fully vaccinated against COVID-19. Although I am happy to have been fortunate enough to receive the vaccine, the shot came with mixed emotions. There’s guilt—why should I be inoculated while so many others in vulnerable populations in the US and beyond are still waiting their turns? There’s anticipation—will I suffer some of the mildly ill effects that some recipients of second doses have reported? There’s also a sense of participating in history: like my ancestors before me, I feel proud to contribute to stemming the destructive tide of an infectious disease. My forebears did their parts to diminish the threats of smallpox and polio, and I feel a certain historical connection to them, doing my small part to ease the transition from the tumult of the past year into a post-pandemic world.

But I also feel dismayed that so many of my fellow humans remain unconvinced that getting vaccinated against COVID-19 is the right thing to do. While some US populations are understandably hesitant given their complex and unfortunate history with this country’s biomedical enterprise, it seems clear that misinformation is fueling vaccine opposition in some corners. What’s even more disheartening is that some of this drummed-up anti-vaccine sentiment seems to be clustering along political lines, which have become even more stark in the past few years.

My view may be anachronistic, but I long for the days when science wasn’t quite the political football it has become in recent times. It’s not that the scientific and political realms have ever been kept completely separate, but it in decades past, there seemed to be more of a shared respect for research findings, even across the political aisle. These days, it seems like even the most basic, demonstrably true scientific facts are drawn into the sphere of politics and debated through the lenses of competing ideologies.

Whereas in decades past, both political parties could at least come together to celebrate scientific breakthroughs—from landing humans on the moon and cloning a sheep to vanquishing infectious diseases through concerted public health initiatives—such unity is now in short supply. In this month’s Critic at Large, authors Melissa Varga and Shreya Durvasula write that, “although science is not partisan, it is political.” The context in which they make that statement bears out their point. But one could argue in a different context that science has become both partisan AND political. And that is a shame.

I’m not suggesting that scientific “facts” are sacrosanct. On the contrary, the scientific method is constructed to challenge established findings based on new observations, as facilitated by advancing technologies. New insights have been built upon the ruins of old ones since the dawn of scientific thinking. 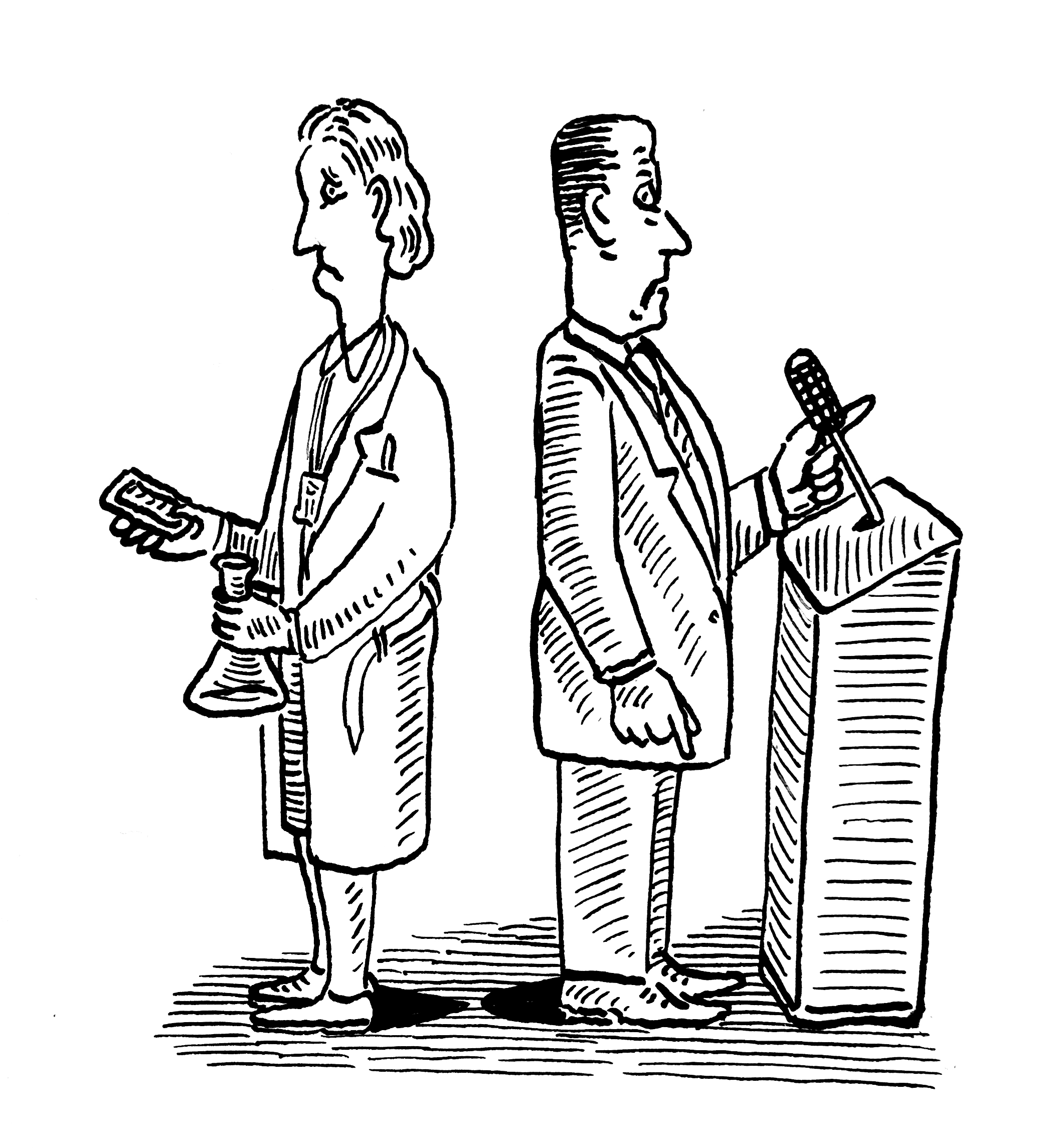 But in the current climate, society writ large has appeared to stray from an essential trust in the scientific process, instead orienting to political biases even in the face of well-supported assertions and painstakingly researched findings. The Scientist has written before about this perception that the public mistrusts science, specifically about how this perception might not be borne out by facts. In 2019, we reported on the results of a Pew Research Center survey of more than 4,400 Americans that showed, “86 percent of Americans say that they have at least ‘a fair amount’ of confidence in scientists to act in the public interest, up from 78 percent in 2016.” Not bad.

That positive trend was thrown into disarray by an unprecedented public health challenge and a political system that was already rife with division and misinformation. By November of last year, when the Pew Center queried the American public on their attitudes toward the coronavirus pandemic, its effect on their lives, and the advice and warnings of the scientific community, partisan cracks started to show. Results released in December indicated that 84 percent of Democrats found that COVID-19 was a major threat to public health, while only 43 percent of Republicans said the same. In that previous 2019 survey, the numbers had been much more even, with 91 percent of Democrats and 82 percent of Republicans reporting having a great deal or a fair amount of confidence in scientists to act in the best interests of the public.

Throughout the past year, science and fact have been kicked around the halls of power, with representatives of the US populace debating the origins of the SARS-CoV-2 virus (no, there is not sufficient evidence to say it originated in a Chinese lab), a suggestion that the US Centers for Disease Control has been inflating COVID-19 death tolls (it has not), and unhinged conspiracy theories about Bill Gates and his mind-tracking stake in vaccines against the disease (I mean, come on).

The false equivalence between the fruits of scientific labor and unfounded conjecture becomes even more dire on that latter count: public trust in the vaccines. According to a Kaiser Family Foundation poll, the political split on the intention to be vaccinated mirrors the differences seen earlier in how seriously members of each party took the pandemic. In March, that organization reported that 79 percent of Democrats said that they had either received at least one dose of a COVID-19 vaccine or intended to do so as soon as possible. Only 46 percent of Republicans responded similarly, and 29 percent of people affiliated with that party said that they would “definitely not” get vaccinated against the disease.

Anti-vaccine sentiment and vaccine hesitancy matter because the goal is to get enough people vaccinated against circulating strains of SARS-CoV-2 to slow or stop community spread and draw this chapter of the pandemic to a close. But because the science behind the disease and the vaccine has been cast into the political arena, the number of people willing to get immunized may not support this goal. Herd immunity is “theoretically possible but we as a society have rejected that,” Gregory Poland, director of the Mayo Clinic's Vaccine Research Group, recently told USA Today. “There is no eradication at this point, it’s off the table. The only thing we can talk about is control.”

I’m not suggesting I have the solution to the partisan erosion of trust in science in the US. But something that might help would be to try and recapture just a hint of the wonder and respect that the public and politicians had for research and discovery just a generation ago. Ultimately, this sort of shift must be modeled by our leaders, who should recognize the difference between political posturing and the evidence-based nature of scientific findings, which coalesce to expand the boundaries of humanity’s empirical understanding of the universe. Our elected officials should leave the self-correction and intellectual revision that is integral to the scientific method to researchers and focus on the numerous other complex social, political, and international issues that deserve and require popular debate and discussion. Outside of the labs, clinics, and journals where its findings are rigorously tested, science should not be up for debate.