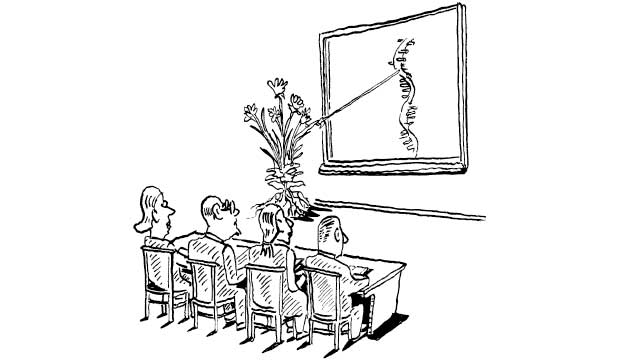 Scientists’ understanding of Kingdom Plantae still has some big gaps, such as exactly when our distant eukaryotic cousins evolved, whether their forebears originated on land or in water, and the shape of their phylogenetic tree. But about one thing there can be no doubt: plants do the damndest things.

A few cases in point: In 1999, the Massachusetts Museum of Contemporary Art (MASS MoCA) opened its doors. Much about the new complex was jaw-dropping, but none more so than the six flame maple trees set in the center of the approach to its entrance. The trees, about 10 feet tall, were growing upside down. The bio-sculpture installation, Tree Logic, was conceived and executed by Natalie Jeremijenko, an artist who is no stranger to science. Over the years, the inverted trees took on novel shapes with their trunks and branches curving up toward the Sun, as...

And then there have been seeds sown in a radically different kind of environment: the International Space Station (ISS). Plants grown some 250 miles above our planet’s surface (from wheat to lettuce to zinnias) experience a gravitational tug about 89 percent as strong as that felt by the MASS MoCa trees. A number of the botanical studies on the space station were performed using Arabidopsis, a lowly weed dubbed “the lab rat of plant biology,” which made its first journey into space in 1982. Versions of the plant went on to glow in the dark on the ISS, and their growth patterns showed that light again trumped gravity, even though both forces worked together to alter the behavior of the plants’ roots.

In this special issue highlighting plant biology, you will find Arabidopsis mentioned over and over again. Here on Earth, the plant’s genome and behavior have been sliced and diced six ways to Sunday. In fact, 2014 saw the 25th International Conference on Arabidopsis Research. Elliot Meyerowitz, profiled here, was an early advocate of using the plant as a model for developmental biology, carrying its DNA in his pocket at scientific meetings to share with potential collaborators.

All the probing confirms that, even though the plant and animal kingdoms share a lot of biology, plants really can surprise us. In “Plants’ Epigenetic Secrets,” Senior Editor Jef Akst outlines the distinctly different way plants silence their relatively huge, transposon-riddled genomes, which, unlike animal genomes, have nearly identical methylation patterns in all their tissues. Don’t miss the lovely photo of jumping-gene discoverer Barbara McClintock in a greenhouse at Cold Spring Harbor Laboratory with plant biologist Rob Martienssen, who continues to study the phenomenon.

Plants also interact with other species in unusual ways. Senior Editor Kerry Grens reports on the transfer of small RNAs in “RNA Interference Between Kingdoms,” presenting evidence from the literature that both plants and parasitic fungi use RNA interference (RNAi) as a mechanism of defense and virulence, respectively. A better understanding of these exchanges may result in new antifungals for crop species.

Peruse the Notebook section for more really remarkable things plants do. “This Parasite Steals More Than Nutrients from Its Hosts” describes a plant that forsakes photosynthesis, stealing both nutrients and mitochondrial DNA from its host. Botanical “neurobiology” is the subject of “Can Plants Learn to Associate Stimuli with Rewards?,” which covers research demonstrating that plants might be able to perform associative learning just like those famous dogs.

Without a doubt, plants are fascinating Earthlings that continue to surprise, confound, and enlighten researchers.