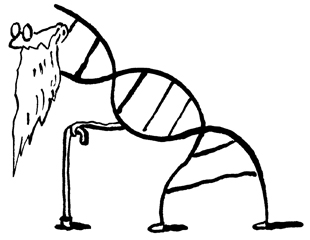 ANDRZEJ KRAUZETo die of old age is a death rare, extraordinary, and singular, and therefore so much less natural than the others. ’Tis the last and extremest sort of dying, and the more remote the less to be hoped for. It is indeed the boundary of life, beyond which we are not to pass: which the law of nature has pitched for a limit not to be exceeded.
—Michel de Montaigne, Essays, Book I, Chapter 57

This centuries-old description by the French essayist perfectly captures just how peculiar it is to arrive at the end of one’s life having escaped death by infection or diseases such as cancer, heart disease, and dementia, for which age is the biggest risk factor. Although Montaigne himself reached what was at the time considered old age, succumbing to a bacterial infection in 1592, when he was 59 years old, he certainly...

This issue of The Scientist is about aging, and the focus is not on the diseases that are hallmarks of time’s passage, but on why cells have a limited life span and what fails on the cellular and molecular level as the years go by. It’s a complicated picture, with lots of missing pieces. The field of cellular biogerontology was kick-started by the observation, published in 1961, that normal cells in culture stopped dividing after 50 or so doublings—the well-known Hayflick limit. In “Of Cells and Limits,” you can meet Leonard Hayflick and learn of his dogma-defying discovery in a profile of the unretired (and unretiring) octogenarian’s contributions to the understanding of cellular aging.

A staff-written feature describes some of the knowns and unknowns of  “How We Age” at the level of the genome, cell, and whole organism. “Wrangling Retrotransposons” lays out a possible connection between aging and a mobile genetic element called long interspersed element-1 (LINE-1 or L1), as it roams around the genome inserting itself in damaging places. Authors Michael Van Meter, Andrei Seluanov, and Vera Gorbunova write that “because genomic instability and DNA damage are key features of aging, it is easy to envision how L1s may contribute to the molecular etiology of the aging process.” In “Nourishing the Aging Brain,” Morten Scheibye-Knudsen takes a hard look at the brain’s nutritional requirements, what is known about neurological brain aging, and the suggestion that caloric restriction could increase human life span and ameliorate some of the effects of aging-related diseases.

The Literature section is devoted to three recent papers that raise interesting possibilities for aging research, albeit using different model organisms: human telomeres’ changing regulation of gene expression as a function of their shortening; roundworms’ upregulation of collagen production and the extension of life span; and the interaction between growth hormone signaling and a life span–extending dietary supplementation in mice.

Whether human life span can be extended beyond the limit of about 120 years remains to be seen. Heaven knows longevity is a wish as old as life itself, and now serious science is shouldering aside the quacks, committing research and funding to probe the real possibility of lengthening our time on the stage. Ankita Bansal and Heidi Tissenbaum (“Quantity or Quality”) sound a cautionary note that increased life span must be accompanied by an increase in health span, lest we merely spend more years in decrepitude; and Matthias Ziehm urges the sharing of data to help further longevity research.

You won’t be that much older by the time you finish reading this issue, but I hope you take away some provocative new clues to how we all—eventually—age.