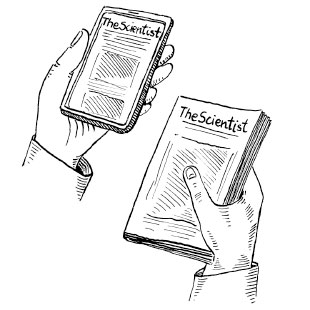 ANDRZEJ KRAUZEFive years ago, with much fanfare, we commemorated the 25th birthday of The Scientist, a unique science news and opinion outlet nursed into being in October 1986 by publishing entrepreneur and bibliometric visionary Eugene Garfield, founder of the Institute for Scientific Information (ISI). As I wrote in my editorial in that special issue, Garfield “launched the publication to disseminate information that he passionately believed was as important to scientists as what they read in research journals: news, opinions, and interviews about funding, ethics, politics, and other career-related issues, plus profiles, book reviews, and even pithy quotes.”

From its origins as a 16-page biweekly newspaper, the print version morphed into a glossy monthly edition still bent on carrying out Garfield’s vision. Not long after that 1986 inauguration, The Scientist added an online presence, the first science publication to make its full text available for...

TS continued to evolve, enhancing its coverage with breaking news and a news blog; introducing a daily newsletter email; producing podcasts, videos, and animated and interactive infographics; and establishing a social media presence—all the while facing the same pressures experienced by all living organisms: competition, lack of resources, and a continually changing environment. In fact, as many readers may remember, just days after that celebratory 25th edition was published, the magazine suffered a mortal blow: the Science Navigation Group, full owner of The Scientist from 2009 to 2011, shut it down.

In evolutionary terms, The Scientist had gone extinct. Twenty-fifth anniversary article titles like “. . . And Many Happy Returns” and “Alive and Kicking” suddenly appeared wildly inappropriate. The issue was filled with articles in which leading life scientists—E.O. Wilson, Eric Kandel, George Church, Chad Mirkin, J. Craig Venter, and others—looked back 25 years and then ahead the same time span, predicting what the next quarter century might hold for their fields. But TS wouldn’t be reporting on those seminal future events any more.

Just days after the shutdown, something truly un-Darwinian occurred. LabX Media Group, headed by Bob Kafato and headquartered in Midland, Ontario, stepped up to buy the publication. Phoenixlike, The Scientist returned, missing just one week online and one month in print. A new business campaign explained to advertisers what a survey of readers had established: scientists read TS not because they have to but because they want to.

To celebrate reaching our third decade, we bring you a double-length feature dedicated to 30 years’ worth of technical innovations that have allowed major-league advances in genome sequencing, microscopy, gene editing, neuroscience, and stem cell biology, most of which were unimaginable in 1986. I’m proud to say that the magazine’s archives fully attest to attentive coverage of these innovations as they arose. Our Lab Tools columns (two articles in every issue) continue this tradition, and for eight years running we have honored such technical advances through our Top 10 innovations competition.

To continue generating our award-winning content, The Scientist has not stopped evolving. We are constantly commissioning feature articles written by leading life-science researchers, taking the pulse of breaking research news, publishing enterprising news stories, spreading that news via diverse social media outlets (our Facebook page recently surpassed 2 million likes), reformulating our award-winning infographics to be optimally displayed both online and on mobile devices, conducting an ambitious array of webinars, and brainstorming special issues that cover hot life-science topics from many different angles, as originally espoused by Dr. Garfield.

So here we are, five years resurrected and going strong. Truly an evolutionary anomaly.