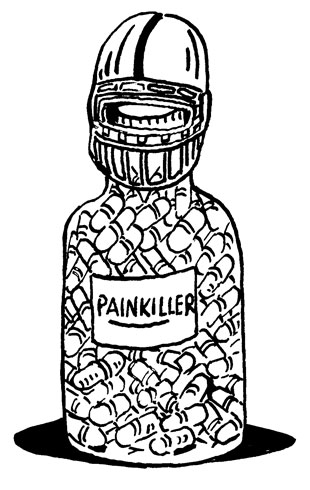 ANDRZEJ KRAUZEThe Super Bowl. Since the first kickoff in 1967, this event has become a consummate American ritual. Last year more than 108 million people tuned in. For at least a decade and a half, my family has attended the same neighborhood party: 15 lbs of kielbasa express-shipped from Buffalo, jambalaya, tubs of beer, congenial betting, ad rating via vocal voting. Everyone eats and emotes as the game unfolds on an enormous TV screen, where the players often seem larger than life.

The audible crunch of contact and the not-so-infrequent scenes of gigantic men writhing on the field in agony are poignant reminders that NFL football players suffer a lot of pain during their relatively short gridiron careers. To keep playing as long as possible, they down incredible amounts of painkillers, and many continue to take these medications long after retirement, not just because they are still...

Unfortunately, NFL players are only a fraction of a very real and widespread problem: addiction to painkillers. In a feature article, “Pain and Progress,” Kerry Grens explains how opioid drugs such as morphine and OxyContin, while very effective at relieving pain, also “tickle the brain’s sweet spot,” leading to cravings for more. She reports on the status of researchers’ quest to conquer the drugs’ “dark side” by developing nonaddictive painkillers, which involves efforts ranging from simple reformulations to render existing drugs harder to abuse, to new drug designs that uncouple the high from pain relief, to targeting the brain’s glial cells, which are revealing themselves to be important players in the sensation of pain.

Speaking of the brain (and who isn’t, these days?) The Scientist staff describes forward-looking robotic or semiautomatic systems for monitoring how neurons interact in living, behaving animal models. These techniques, which outperform human hands in both speed and precision, span the complexity of animal nervous systems—from nematodes (302 neurons), to zebrafish and fruit flies (>100,000 neurons), to mice (~75 million neurons)—and not just in single individuals, but also in many animals simultaneously. The ultimate goal is to “eavesdrop on [cells] as they talk to each other, or send [a signal]to a cell and see how it affects the next cell,” says MIT neuroscientist Ed Boyden.

Diving even deeper into neuron behavior, “Epigenetics of Regeneration,” describes a recent report about the molecular changes that occur after injury to a peripheral nerve—research that could have implications for repairing central nervous system damage.

Other topics in this month’s issue include DNA-encoded drug discovery methods, new graduate programs aimed at turning out PhDs savvier about computational biology, and the surprising results of a study of E. coli strains that have been evolving in the lab for 25 years. For medical-history buffs, “Syphilis: Then and Now” reexamines the debate about where the “French disease” really originated. Genetic sequencing is shedding light on the evolution of syphilis and the relationship between various subspecies of the bacterium Treponema pallidum, which cause not only syphilis, but the related, nonsexually transmitted diseases yaws and bejel as well. Of added interest is the possibility of cross-species transmission between primates and people in Africa and what that means for a second World Health Organization drive to eradicate yaws from the continent. And here Kate Yandell describes techniques to measure an epigenetic mark, the hydroxymethylation of cytosine, which is particularly abundant in embryonic stem cells and in brain neurons, but markedly reduced in some cancer cells.

On February 2 I’ll be tuned in to this year’s Super Bowl with a different mind-set. Kielbasa sandwich in hand, I’ll be silently rooting for an effective, less addictive drug to ease the aching bodies of both teams’ players.