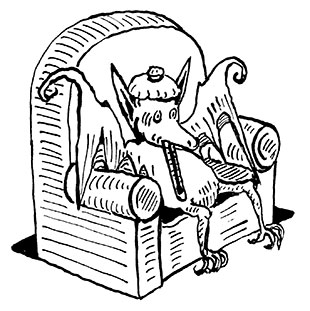 ANDRZEJ KRAUZEPeople need dramatic examples to shake them out of apathy.” So says Bruce Wayne at the start of Batman Begins, the first film in The Dark Knight Trilogy, explaining to Alfred Pennyworth, the family butler, why he has decided to return to Gotham and adopt an alternate persona. Wayne faces his crippling fear of bats (chiroptophobia), costumes himself appropriately, and the rest is movie legend—Batman becomes a superheroic symbol of good, and a box-office smash yet again.

Well, the “dramatic examples” involving real bats in two of this issue’s features should go a long way toward apathy reduction. Even though the winged mammals provide a host of beneficial ecosystem services, such as pollination, seed dispersal, and insect control, bats have been getting an especially bad rap lately, tarred as potential spreaders of lethal viral diseases, including Ebola, MERS, SARS, and Marburg hemorrhagic fever. In “Lurking...

Bat biology and ecology are very unusual and not particularly well understood.

While these traits may explain why bats don’t die from infection with some deadly pathogens, the animals certainly are not invincible. Reading the introduction to Marmaduke Kilpatrick’s feature about epidemic diseases affecting wildlife, “A Race Against Extinction,” one can only feel empathy for him, his colleagues, and their study subjects as the researchers witness firsthand a disease that has killed bats by the millions. White-nose syndrome is “one of the most devastating diseases to affect mammals in recorded history,” Kilpatrick writes. He also chronicles a fungal epidemic among amphibians in Australia and Central and South America and the spread of the West Nile virus, which mainly affects birds but can also spill over to humans. He explains that controlling infections among wildlife is fraught with difficulty, and criticizes what he sees as a general trend toward risk aversion among wildlife managers. “Inaction results in many populations and species being ‘monitored to extinction,’ when certain actions, while risky, have the potential for a much more positive outcome.”

There is no apathy shakeout needed in the field of technical innovation. For the seventh consecutive year, The Scientist celebrates products that further research in the life sciences and perhaps even help address human disease. Five of this year’s winners of the “Top Ten Innovations 2014” are signature contributions to genomic sequencing and analysis. Among the other winners are cell-line and organoid models that will further drug research, a simple antigen test that will improve blood matching, a website for managing the deluge of scientific literature, and an imaging system based on a method devised by one of this year’s Nobel laureates.

There are many more dramatic examples of the latest in life-science research in this issue. And we are already at work on a host of new examples for 2015.