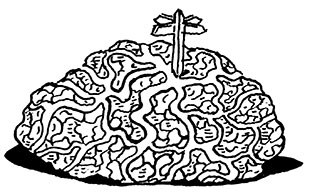 ANDZREJ KRAUZEMy addiction to crime novels unexpectedly wormed its way into the preparation of this neuroscience-focused issue of The Scientist. A faithful follower of Jo Nesbø’s Harry Hole series, I am well acquainted with Hole’s detective partner Beate Lønn, whose contributions to crime solving rely heavily on her fusiform gyrus, which allows her to recognize “all the people she had ever met.” So finely tuned is her brain’s face-perception machinery that Lønn is “one of thirty-odd people in the world who were known to have this ability.”

Lønn’s feats of face recognition make for good pulp fiction, but Kerry Grens’s cover article, “A Face to Remember,” gave me a true-to-life understanding of how face recognition is processed in the brain. It’s riveting reading: Neural stimulation of “face patches” in the fusiform gyri of seizure-prone patients induces temporary face blindness—the inability to know a person’s...

Collecting the experimental data to explain face perception has been heavily dependent on the development of ever-more detailed brain imaging techniques: positron emission tomography (PET), fMRI, optogenetics, and diffusion tensor MRI (DTI). While fMRI typically maps what’s happening in the brain’s gray matter (the cell bodies of its neurons), DTI allows mapping of white matter (nerve cells’ myelin-sheathed axons), which routes signals to different areas of the brain’s gray matter. The technique and increasingly sophisticated variations, explained in “White’s the Matter,” has resulted not only in the stunning images of the Human Connectome Project, but in a much more sophisticated understanding of how the brain works. Turns out white-matter tracts are compromised in patients suffering from face blindness.

The subject of this month’s Profile, Marcus Raichle, was instrumental in introducing PET imaging as a probe of brain function, beginning in the 1970s. And his observations on blood flow and glucose metabolism in the active brain laid the groundwork for the development of fMRI. Meanwhile, Scientist to Watch Takaki Komiyama uses two-photon calcium imaging—a technique that requires microscope viewing through a glass window inserted in a mouse’s skull—to study changes in cortical neural connections during learning. Behavioral studies can be tricky, however, as the experimental subjects react to all sorts of stressors. In “Mouse Traps,” Marissa Fessenden reports on how to get the best data from your behavioral experiments.

And all this mapping of function to specific brain regions is beginning to pay off in a big way with the development of ever-more-sophisticated prosthetic devices, described in “Neuroprosthetics.” Neural-computer interfaces are returning exquisite motor control and even tactile feedback to patients who are paralyzed or missing limbs, as well as assisting the hearing and vision impaired. (See also “The Bionic Eye,” The Scientist, October 2014.)

Exploring how the brain works is so fascinating that it’s small wonder two 2014 Nobel Prizes were awarded for work that has advanced knowledge of its structure and function. The Nobel Prize in Physiology or Medicine went to three neuroscientists for the discovery of place cells and grid cells—the brain’s own system for mapping the body’s immediate environment. And in the chemistry category, three researchers won the prize for the development of imaging techniques that allow super-resolution at the cellular level. “It’s childish, but it still gives me great pleasure to see high-res pictures everyone told me would be impossible,” 2014 laureate Stefan Hell told Nature News in 2009.

The sleuthing of such nonfiction detectives is as addictive as that invented by the best crime writers.