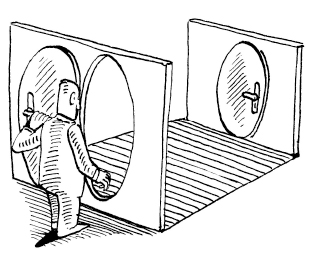 ANDRZEJ KRAUZEHobbit houses, jigsaw puzzles, and nuclear pores have a lot more in common than you might think.

In 1937, J.R.R. Tolkien introduced his dearly beloved hobbits as “a little people, about half our height, and smaller than the bearded Dwarves.” Their domiciles “had a perfectly round door like a porthole, painted green, with a shiny yellow brass knob in the exact middle. The door opened on to a tube-shaped hall like a tunnel.” Not such a bad description of nuclear pore complexes either, those intricately constructed portals that pierce the double membrane enveloping the nucleus and control traffic into and out of the organelle. Of course, the aptness of the analogy has a lot to do with the level of magnification (not to mention imagination). But you can judge for yourself in this month’s issue, with illustrations that go from a 3-D model pieced together from electron...

While Tolkien enthusiasts can YouTube how to construct a hobbit door (very tricky to hang, hinge-wise), structural biologists didn’t design the object of their fascination—their task is to decode how it is built. Awe is the only appropriate response to the architectural masterpiece that is emerging.

Which brings me to jigsaw puzzles. I love doing them, the bigger the better. But the pieces I fit together are two-dimensional, and 3-D puzzles boggle my mind. Nuclear pore complexes raise jigsawing to a far more rarified level. In their feature, Daniel Lin and André Hoelz describe these “massive molecular machines” as put together from “more than 1,000 protein subunits with a total molecular mass of approximately 120 million daltons—the equivalent of more than 6.5 million water molecules.” The subunits self-assemble to form more than 30 types of nucleoporin proteins, 17 of which constitute the beautifully symmetric three-ringed core of the nuclear pore complex. Through the pore’s central channel smaller molecules enter and exit by diffusion while proteins or ribosomal units in their native states hop a ride on cargo ships known as karyopherins.

The study of another cellular envelope has been the research passion of Satyajit Mayor, this month’s profilee (“Pushing Boundaries”). His fascination with the organization and function of the plasma membrane began with his study of glycoproteins tethered to the outer surface of a parasite. He now investigates the nanoscale organization of such proteins and the role of the cytoskeleton in that organization.

All of these exciting discoveries owe much to technical innovations, which we take stock of in our ninth annual Top 10 Innovations competition. Assembled by Senior Editor Bob Grant, this year’s panel of independent judges evaluated submissions of products or techniques new to the market from fall 2015 to fall 2016. Given the buzz surrounding CRISPR technology, it’s no surprise that several products that facilitate the technique made the final list. Ditto for sequencing tools and methods that enhance the evaluation of new drugs. But the number one spot goes to a method for doing Western blots in single cells. (See “Top 10 Innovations of 2016.”)

Whether it’s zeroing in on single cells or individual nuclear pores, as more and more life science puzzles are fit together, we look forward to covering the story.