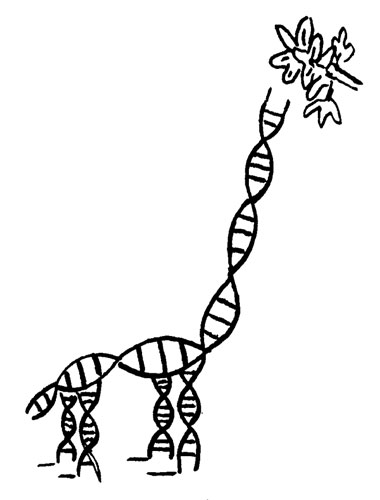 I was first introduced to Charles Darwin’s flamboyant grandfather when I was an undergraduate searching through Michigan State’s wonderful Special Collections. In between bothering the curators for archived copies of Howard the Duck, I read Erasmus’s prose and poetry, and was treated to a great mind grappling with ideas that presaged one of the truly great ideas of modern times, the theory of evolution. As the passage above hints, Erasmus believed that environmental influences, in particular the “Imagination” of the parents, greatly influenced the phenotype of the child.

We can expect that epigenetics will be held up as the forerunner of that bastard child of Creationism, Intelligent Design.

How very pre-Victorian (and...

The Lamarckian idea that giraffes’ reaching for leaves resulted in longer-necked progeny seems silly to us today, primarily because we know so very much about the underlying mechanisms of genetics. And yet Lamarck may have a last laugh—think inheritance patterns in ciliates, or the effect of diet on the coat color of agouti mouse offspring. We are in the midst of a paradigm shift in our understanding of how evolution can act…on evolution, yielding mechanisms that allow both adaptation and heritability within the course of a lifetime. And such paradigm shifts almost always have societal consequences. Manel Esteller shows that epigenetics also impacts the “dark genome” in a way that may improve cancer diagnostics. An even more far-reaching consequence is that it may prove possible to engineer epigenetics, as Bob Kingston’s Thought Experiment tacitly suggests. If so, will epigenetic engineering be subject to the same restrictions as genetic engineering? Or will this be a way that we can not merely treat disease, but possibly engineer human health into future generations?

Such possibilities will be the rational outcome of a great deal of research and debate that is yet to come. However, there are at least two outcomes of the revolution in progress that would seem to have more near-term consequences. First, the overturning of a purely Darwinian paradigm will undoubtedly be viewed as the overturning of Darwin and his Theory itself. It matters not a whit that science will have been shown, once again, to be self-correcting, and to provide a means of advancing knowledge through the application of the experimental method and mechanistic naturalism. We can expect that epigenetics will be held up as the forerunner of that bastard child of Creationism, Intelligent Design. Dribs and drabs of this are already appearing on the Interwebs, but it may soon come to a school board near you. Second, the notion that environmental tags are embedded in our genome within a human time frame has got to be one of the best things to happen to tort law in a long time. DNA typing has led to the conviction of the guilty and the freeing of the innocent. Epigenetic typing may now lead to expert testimony regarding the presymptomatic impact of environmental disasters on susceptible populations. This may seem fanciful, but where there are moneyed interests (on either side), the science will inevitably follow.