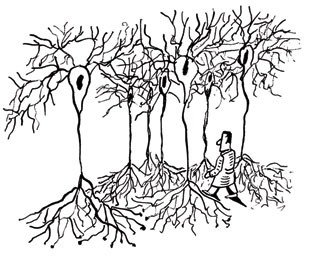 ANDRZEJ KRAUZEMapping neural networks has come a long way since Santiago Ramón y Cajal, at the end of the 19th century, drew his remarkable diagrams of black, Golgi-stained neurons. It is easy to imagine Cajal’s delight in the beautifully colored and detailed images that routinely grace the covers of neuroscience journals these days, because he was both a scientist and a would-be artist, denied the latter career choice by his autocratic father.

In this month’s issue, which focuses on neuroscience, we pay homage to Cajal, with a cover painting of two pyramidal neurons done in enamel on gold by neuroscientist-turned-artist Greg Dunn. The work was commissioned by the Center for the Neural Basis of Cognition at Carnegie Mellon University. And Cajal’s own detailed drawing of a human cerebellar Purkinje cell illustrates the Foundations column on the issue’s last page. It was Cajal’s ability to visualize neuronal...

While the understanding of how neural connections work is improving by leaps and bounds, the sheer numbers of neurons in the human brain (100 billion) and the complexity of the brain’s wiring (100 trillion connections) are daunting. Two feature articles illustrate how two very different types of mapping—of malfunctioning neural circuits and of genetic abnormalities associated with psychiatric disease—are being used to better understand brain-based disorders.

Neurosurgeon and researcher Andres Lozano describes how deep-brain stimulation by electrodes carefully placed into malfunctioning circuits in the brain can banish a child’s dystonia or relieve the tremors of Parkinson’s disease. In “Tuning the Brain,” Lozano notes that the technique is also “allowing the functional mapping of previously uncharted neurons and is revealing the behavioral consequences of the activation or dampening of specific brain circuits.”

In “The Psychiatrist’s Jigsaw,” Megan Scudellari reports that the notoriously complex genetics of schizophrenia and bipolar disorder are finally beginning to yield to the power of genome-wide association studies. A handful of copy number variations and 22 risk alleles for schizophrenia have now been identified, but researchers estimate that some 6,000 to 10,000 single nucleotide polymorphisms are probably associated with the disorder. But this is cause for hope, not despair. As one scientist puts it, “We finally have an idea as to how many puzzle pieces there are. We’ve got 22 pieces, maybe of the corners and edges. Now we need to get the rest of the edges together. We need to find, say, 2,000 of these 6,000 loci. If we do that, we’ll actually have a good fix on the path­ways involved.”

The ultimate goal of brain mapping is to understand the physical basis of behavior, both normal and aberrant, at the level of those gaps Cajal posited more than a hundred years ago. Individual synapses are only about 20 nm wide, so they are tough to image. One can get a really close look using an electron microscope, but coupling this with light microscopy promises to be more useful. In “Synapses on Stage,” Kelly Rae Chi reports on techniques for studying synaptic connectivity. You can’t help thinking again about Cajal when you read this article. It’s worth comparing the article’s beautiful Brainbow3 image of Purkinje cells, with their spectacular Technicolor dendrite trees, to his drawing of the same type of neuron in the Foundations article. And as you read about the technique of array tomography, remember once again Cajal’s remarkable ability to visualize how multiple serial sections fit together in 3-D.

Given the scope of the job, future breakthroughs in neuroscience will require enormous cooperation and innovation in a number of disciplines. But it’s important to appreciate how much of what we know harks back to a solitary Spaniard squinting through a microscope and drawing what he saw.