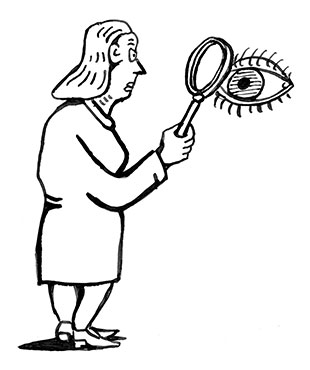 ANDRZEJ KRAUZETo give a blind man an image / is to give something so tenuous it can be infinite / something so vague it can be the universe.” Literary giant Jorge Luis Borges penned these lines in a poem toward the end of his life, and he knew whereof he spoke, having gone completely blind when he was 55 years old after suffering from progressive vision loss beginning in his 30s. Borges lived for 31 years in total darkness.

Devoted to vision and the researchers who study it, this issue continues our annual in-depth consideration of one of the senses. So far, we’ve covered taste (2011), touch (2012), and smell (2013). Several of the articles deal with research aimed at actually giving “a blind man an image.” In “The Bionic Eye,”  four different groups of scientists explain how, from tenuous beginnings, they are refining prostheses...

In “Eyes on the Prize,” Jeffrey Perkel reports on stem cell therapies for treating conditions such as retinitis pigmentosa and macular degeneration, the severe form of which currently afflicts some two million Americans. Early clinical trials look promising, helped by the fact that the eye is small and immune-privileged as well as amenable to observation with noninvasive methods.

This month’s Modus Operandi describes an easier, cheaper method for obtaining ex vivo retinal recordings, which should make retinal function easier to study. And a recent publication covered in The Literature section highlights new findings on how Müller cells—glial cells in the retina painstakingly detailed by Cajal more than 100 years ago—guide incoming light, which must travel through a forest of cells before reaching the photoreceptors at the back of the retina. Our short literature reports include a story on research into how sounds activate the visual cortex and one on the role of microRNAs in the maintenance of cone cells, which modulate color vision. And in Online First (here), you can revisit an article detailing what is currently known about the eye’s unique microbiome.

Associate Editor Kerry Grens dissects the evolution of human color vision in “The Rainbow Connection.” It’s a fascinating story and one that can be told “from beginning to end, in exquisite genetic and molecular detail.” Interestingly, one researcher used his own DNA to clone a human cone opsin for the first time, and another muses about “curing” himself of the trichromatic vision humans possess by self-administering the same gene therapy he employs to give monkeys additional opsins.

This month’s Notebooks are all vision-related: What does it mean that blind cavefish can tell larger from smaller quantities of objects? That ancient sea predators had crappy vision? New image-tracking programs extract a unique fingerprint for each individual in an animal swarm. And, most mind-boggling of all, video recordings of the vibrations in plants and potato-chip bags can be processed to decode the sounds they “hear.”

The collective brainpower devoted to giving “a blind man an image” and to understanding the mechanisms of vision on myriad levels is beginning to open up a whole new universe. As vision researcher and eye spy Jay Neitz puts it, “It’s a brave new world.”