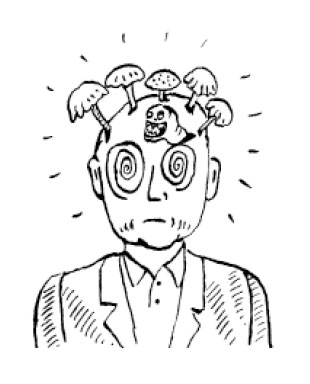 ANDRZEJ KRAUZEHaving lived through it, I can free-associate for hours about the so-called Hippie Era. It’s really (dare I say it) an invitation to fall down the rabbit hole of memory. Music comes to mind first: White Rabbit (“One pill makes you larger/And one pill makes you small/And the ones that mother gives you/Don’t do anything at all”), of course, and Lucy in the Sky with Diamonds (tangerine trees, marmalade skies, kaleidoscope eyes), to name just two. Then there was the attire (patterns run wild, bell bottoms, beads); the pelage (long, wild, puffy), which got star billing in the 1967 musical Hair; and the books (Tom Wolfe’s The Electric Kool-Aid Acid Test and Richard Brautigan’s Trout Fishing in America come to mind).

But for a wordsmith like me, it’s the associated vocabulary and the era’s identifying dictums that I love: “Turn on, tune in, drop out,”...

So when Diana Kwon turned in her cover story (here) on using psilocybin, mescaline, ayahuasca, and synthetic LSD as treatments for a wide variety of psychological ailments, not only did the article inspire a trip down memory lane, but it made me curious about the etymology of the word “psychedelic.” Apparently, the term was coined in 1956 or 1957, just as the beatnik era was being supplanted by hippiedom. British psychiatrist Humphry Osmond and author Aldous Huxley (Brave New World) were searching for a word that was less of a downer to describe the effects of hallucinogens, then known as psychotomimetics—psychosis imitators. Huxley, who had written about his experiments with mescaline (The Doors of Perception), employed verse: “To make this mundane world sublime/Take half a gram of phanerothyme.” To which Osmond countered: “To fathom Hell or soar angelic/Just take a pinch of psychedelic.” (Both words mean “mind/spirit/soul revealing.”) How groovy is that?

The drugs got a new moniker, but the counterculture’s recreational use of psychedelics earned the compounds a bad name, and a 1970 Schedule 1 assignment of the drugs by the US Department of Justice basically stopped federal funding for research into how they worked in the brain and how they might serve medicine. Kwon neatly summarizes the state of research today, as scientists pick up on a handful of trials from the 1950s, ’60s, and ’70s and begin to work out the neural pathways that are altered during a psychedelic trip.

As an interesting coincidence, this issue also contains a feature about the opposite of mind expansion—the truly mind-altering condition of Alzheimer’s disease (AD). Decades of research have been devoted to treatment strategies aimed at wiping out amyloid plaques or other pathological manifestations of AD dementia—to little or no avail. So, if attacking the plaques after they form is not effective, evidence about how AD initiates its destruction in the first place is even more warranted. Is inflammation the culprit? Or could the cause be some sort of infection? A recent article in The New York Times summarized research suggesting that a gene associated with Alzheimer’s risk originally acted to help fight parasites, and, in their absence, may predispose the brain to an immune attack on itself. In “Do Microbes Trigger Alzheimer's Disease?,” Jill Adams reports on a long-scoffed-at but decades-old theory that infection by certain microorganisms that cross the blood-brain barrier is involved in some cases of AD, triggering both inflammation and the telltale formation of plaques.

There are plenty of other mind-expanding articles in this issue of The Scientist, including one that links the gut microbiome to mental health (here); a report on whether limb prosthetics give athletes an unfair advantage (here); and an essay on de-extinction experiments aimed at bringing back some semblance of the woolly mammoth (here).

So chill out and tune in. We’re socking it to you.