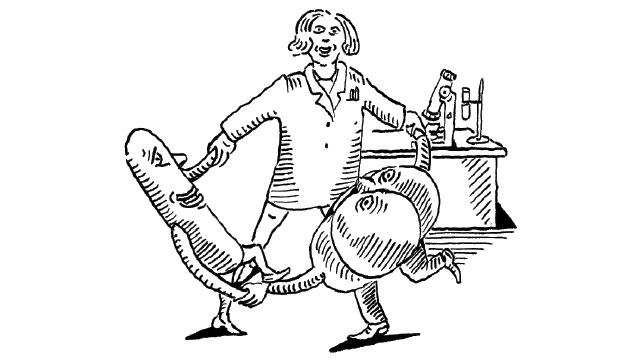 ANDRZEJ KRAUZEThere was a sign hanging on the door of a microbial ecology lab at the South Carolina Department of Natural Resources, where I did my marine biology master’s thesis work: “Respect bacteria—they’re the only culture some people have.”

This homage to our single-celled partners on this planet stuck with me over the years, and my appreciation of microbes has only grown as I’ve learned more and more about them—most recently, the central role archaea have played in the evolution of life on Earth.

The current thought is that millions of years ago, archaeal ancestors of eukaryotes and ancient bacterial species engaged in fortuitous (as least from the human perspective) acts of cellular hanky-panky. Engulfed by more-complex, nucleated cells, bacteria entered into a symbiotic relationship with their archaeal hosts, and the partnership blossomed.

Eventually, the symbionts evolved into a new type of cell, with those encapsulated bacteria morphing into...

And how lucky we eukaryotes are to count archaea as distant evolutionary relations. Without them, eukaryotic cells might never have come about, and the most spectacular life forms—forests full of trees, shoals of giant fish, flocks of bright birds—might be missing from our planet.

As researchers prospect ever further for archaeal species, the ancient prokaryotes, which were initially misidentified as bacteria, are turning up virtually everywhere: in the alkaline lakes and hot springs where intrepid naturalists originally found them, but also in forest soils, marshlands, ocean waters, and even the human body. Scientists recently detected members of this ancient microbial group inhabiting human lungs, colons, mouths, and skin. So I guess some people have at least two cultures.

As befits a fascinating corner of biology, research on archaea continues to surprise. Not only are the organisms turning up in unexpected places, but from every new pocket emerge new species, genera, even orders, classes, and phyla. As Amber Dance writes in “Archaea Family Tree Blossoms, Thanks to Genomics” here, “The archaeal family tree has exploded in recent years, and the discoveries show no signs of slowing. . . . With these discoveries come insights into their unique and diverse biology, as well as their roles in the environment.” Add to those important implications the insight archaea give researchers trying to reconstruct the evolutionary relationships among the three domains of life.

This is an unsettled issue, even though there is general agreement that the intricate endosymbiosis that brought about eukaryotes happened. Some researchers, such as those Dance interviewed for her story, conclude that sequence data point to a freshly discovered, and more recently evolved, archaeal group, the Asgard superphylum, as the branch from which eukaryotes grew. But others, including Institut Pasteur scientists Patrick Forterre, Violette Da Cunha, and Morgan Gaia, contend that eukaryotes and archaea share a more recent ancestor than that shared by eukaryotes and bacteria. As they write in “Opinion: Archaea Is Our Evolutionary Sister, Not Mother,” here, “Archaea would be our sisters and bacteria our cousins.”

While this debate simmers and archaeal explorations bear fruit, I find myself, yet again, amazed not only by the complexity and history of life on Earth, but by the ability of one particular eukaryotic species to piece it all together. And to think, we humans could all conceivably trace our lineages back, through eons of evolution, to a couple of cells cooperating to make a go of it in a changing world. Those are some shared cultures I think all Homo sapiens can celebrate.