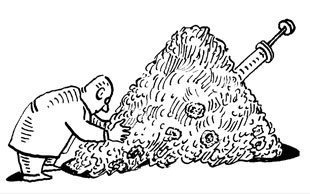 ANDRZEJ KRAUZEJust 10 years after Richard Nixon declared war on cancer in 1971, what appeared to be an anomalous epidemiological puzzle heralded the onset of a new war that continues to be fought against another wily foe, the retrovirus HIV. In the war on cancer, there seems to be a real feeling that some kind of corner has been turned, and last month we focused on some of those hopeful advances, especially in the field of personalized drug regimens and immunotherapy. This month The Scientist covers the latest reconnaissance and tactical maneuvers that are exciting hopes that HIV/AIDS can actually be vanquished.

HIV is a stealthy interloper that inserts its genome into the DNA of the T cells it infects, causing a devastating illness. A cocktail of antiretroviral therapies (ART) has changed AIDS from a death sentence into a chronic, treatable condition for many. But the treatment...

Hopeful straws in the wind include new vaccine designs and latent HIV eradication.

Several articles in the May issue address this sneaky behavior. “Hidden Menace” explores what’s known about the problem and the latest advances being made in the effort to destroy the reservoir. One audacious method, labeled “shock and kill,” proposes to reactivate latent HIV in order to wipe it out. You can read about recent research aimed at figuring out whether clonal T cells are harboring latent viral DNA. And Modus Operandi describes the use of whole-body immunoPET scans to locate tissue areas that host replicating SIV virus in macaques, including in animals known as elite controllers that naturally suppress infection.

Only 14 million of the 35 million people infected with HIV are on ART, according to a World Health Organization estimate. Many of those are not on the treatment because they are unaware that they are infected, and thus serve as sources of new infections. The quest for an effective vaccine that would protect against HIV has been ongoing for as long as the cause of AIDS has been known. In “Defeating the Virus,” veteran quester Wayne Koff, chief scientific officer at the International AIDS Vaccine Initiative, describes the exciting state of current HIV vaccine research, from designer immunogens based on new knowledge of the most effective broadly neutralizing antibodies, to direct injection of such antibodies (or the genes coding for them), to cellular immunity ramped up via custom-designed mosaic antigens.

New and unconventional drug design continues at a furious pace. A February 2014 online Nature paper generated a huge and hopeful buzz, reporting the effectiveness (in animals) of a two-armed decoy made from pieces of the two receptors (CD4 and CCR5) to which HIV must bind in order to gain entry to host T cells. Researchers are investigating unusual antibodies produced by llamas, alpacas, and camels for effectiveness as vaginal microbicides because the molecules are relatively insensitive to pH. And CRISPR gene-editing systems designed to cripple CCR5 or to cut out inserted viral DNA have been demonstrated in vitro. Our May profilee, virologist Carol Carter, studies HIV assembly and release with the aim of identifying new viral protein targets.

There are, of course, many facets other than research that must be addressed if the AIDS epidemic is to be halted. But a view from the ramparts suggests that after more than three decades of relentless basic research, a number of clever flanking actions may finally turn the tide in the war against HIV.