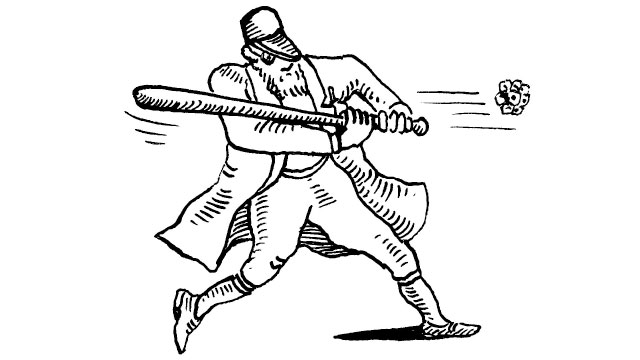 It’s happened every spring for the last seven years: our annual issue dedicated to cancer research more or less coincides with the opening of the major-league baseball season. A recent New York Times article about revising the game to make it move faster (and hence be less boring) got me thinking about whether changing the rules governing this American pastime is an apt metaphor for what’s now happening in cancer research.

The Oscar-nominated 1949 film It Happens Every Spring about a baseball nobody can hit also seems to contain a metaphorical nugget. The ball flies through a window into the laboratory of one Professor Simpson, where it acquires the ability to repel wood after a dunking in “methylethylpropylbutyl.” Using the ball, Simpson goes on to pitch a major-league team all the way to the World Series.

Why do I see metaphors here? Cancer research is never boring,...

This issue of The Scientist takes a look at some exciting new research and preclinical advances, particularly as they pertain to extending the initial promise of various immunotherapies. In “How Cancers Evolve Drug Resistance,”  Anna Azvolinsky reports on a battle that never seems to be over—the fight against tumors’ evolution of drug resistance. Genome sequencing has inspired ever-more-targeted and predictable molecular therapies, but still, “there’s this constant chase of the next resistance mechanism and next ther­apy,” says one investigator. The latest challenge is the development of resistance to new immunotherapies such as checkpoint inhibitors. Researchers are keen to understand the mechanisms of such resistance—even though it is less common than resistance to molecularly targeted therapies—given the extraordinary promise of turning a patient’s own cells against cancer.

To that end, the identification of tumor-specific proteins, mutant gene products known as neoantigens, is a hot area. Cancer researchers Stephen Shoenberger and Ezra Cohen (“Neoantigens Enable Personalized Cancer Immunotherapy”) write about how identifying the number and type of neoantigens in a particular cancer and selectively zeroing in on those mutant proteins that make the best T-cell targets has the potential to greatly improve the safety and accuracy of immunotherapies. One of the issue’s Lab Tools (“Tracking the Evolutionary History of a Tumor”) describes methods for analyzing single cells that make up the heterogeneous tumor to decipher its evolution.

A second Lab Tools (“Gel Scaffolds for Delivery of Immunotherapies”) covers new efforts to carry several types of immune therapies directly to the tumor site using biocompatible polymers as molecular ferries. Bio Business (here) offers a summary of attempts to address safety problems that have arisen in recent CAR T-cell trials, and here, you can read about a new method to refine immunotherapy by going after a subset of lymphocytes known as regulatory T cells, which suppress the immune response to tumor cells.

A Critic at Large (here) urges scientists to develop more biomarkers to identify the best immunotherapy treatment for each patient. And Reading Frames author Wendy Whitman Cobb discusses how politically motivated regulatory changes might affect those who treat and suffer from cancer (here).

With ever-improving immunotherapies, researchers stand a really good chance of knocking cancer out of the park—provided they can keep that ball from coating itself in resistance to the bat.

A final note: we mourn the late-February passing of Eugene Garfield, founder of The Scientist and truly a major-league player in science publication.