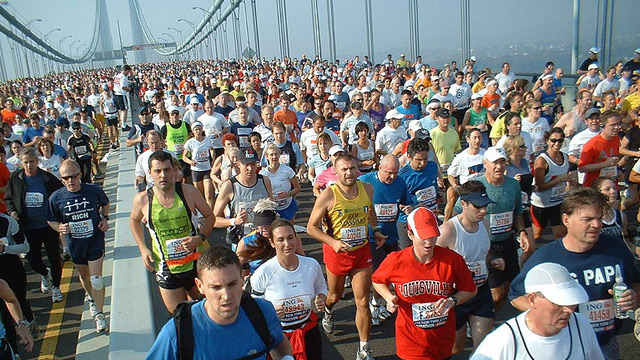 In New York City, where I live, the annual marathon is a very big deal. On November 4, more than 47,000 runners planned to pound the pavements of the five boroughs—a logistical tour de force that the municipal authorities manage to pull off year after year. But 6 days before the marathon’s starting gun was to fire, a hugely more impressive tour de force named Hurricane Sandy pounded my city and a wide swath of the surrounding East Coast, inflicting record-breaking destruction that led NYC Mayor Michael Bloomberg to reluctantly cancel the marathon at the last moment (and to announce that he would vote for Barack Obama because of the President’s position on climate change).

What makes so many people—of all ages—such avid marathoners? Just before Sandy arrived, Edge.org posted a conversation, “Brains Plus Brawn,” with evolutionary biologist Daniel Lieberman of Harvard University, who studies “feet...

But the majority of the world’s people no longer hunt and gather. So we are left with big brains, a hunter-gatherer metabolism, and an epidemic of obesity. In this issue of The Scientist, two features examine what happens when glucose metabolism goes awry in bodies mismatched with modern culture. “Fat’s Immune Sentinels” describes how the number of immune cells residing in healthy adipose tissue increases to a new “set point” when nutrient intake exceeds expenditure, changing their roles to cause chronic, low-grade inflammation that alters glucose metabolism.

“Metabolism and the Brain” makes a case that faulty glucose metabolism, such as the insulin resistance associated with diabetes, often goes hand-in-hand with schizophrenia, depression, and other neuropsychiatric disorders, as well as with Parkinson’s, Huntington’s, and Alzheimer’s diseases. Teasing out the details of the connection between metabolic and neuropsychiatric disorders may well lead to novel treatments.

Big, non-hunting-and-gathering brains also engage in an amazing amount of invention, a phenomenon we celebrate with our annual Top 10 Innovations competition. Taking this year’s top prize is a company that offers syn bio a la carte, at fast-food prices. Read about that and check out the other winners here.

Other goodies include a profile of epigenetics researcher Stephen Baylin; an essay by field biologist George Schaller; end-user reports on high-content screening systems and methods that maximize cell-based assays; and the story of the re-creation of an experiment reported by Charles Darwin in his 1872 book The Expression of the Emotions in Man and Animals.

The father of evolution believed there was some continuum of emotional expression that connected animals and humans. Daniel Lieberman, reflecting on how radically the lives of modern humans differ from those of our Paleolithic ancestors, concurs. “One important question we can test is the idea that a more evolutionarily informed way of using our bodies is actually relevant to helping people.”