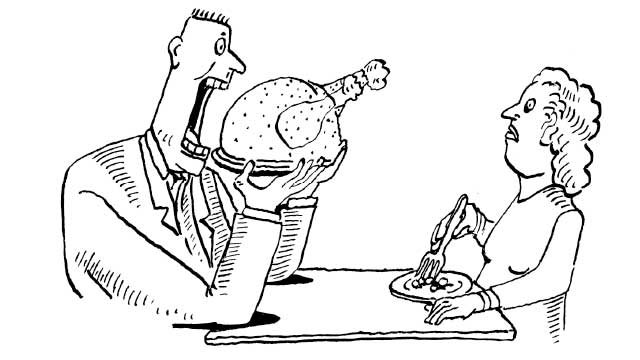 Still life is an art form whose popularity stretches back to the roots of human civilization. Depictions of food often feature prominently in wall paintings in ancient Egyptian tombs and are common in Roman mosaics and frescos. By the 16th century, Dutch and Flemish artists were producing incredibly lush still lifes, some almost over-the-top in their portrayal of food as a corporeal pleasure. Artists of more recent centuries cubed, Dada’d, abstracted, and photorealismed the genre’s subject matter.

For this month’s cover we chose what I view as a very austere still life, but it is an apt illustration for Senior Editor Bob Grant’s feature on the science behind fasting—what happens to the body’s physiology that is detrimental or beneficial. Evidence suggests that a steady restriction of caloric intake extends life span and provide a host of health benefits. But adherence is almost impossible for most people. Grant...

Gluten-free diets are another fad, but are currently the only cure for those with celiac disease. Catherine Offord describes the worldwide rise in the number of people diagnosed with the autoimmune disorder and examines some of the possible contributing factors, given that currently known genetic risks don’t seem to explain the phenomenon. One challenge facing epidemiologists is the multitude of gluten-free dieters who have self-diagnosed gluten sensitivity, rightly or wrongly.

Two of this month’s Notebooks deal with how humans process what goes down their gullets. “Mammalian Jaws Evolved to Chew Sideways” reports on evolutionary changes to mammalian lower jawbones that, together with changes in dentition, ultimately allowed mammals to process a wider variety of foods. A genomicist who is also a competitive cyclist did a DIY repopulation of her gut microbiome after years of antibiotic treatment for chronic Lyme disease. Buoyed by the results, she has gone on to study the gut microbiomes of athletes to suss out exercise’s effects on microbial health (here).

The lead article in The Literature department (here) features work done with fruit flies and mice that were fed a diet based on the overall amino acid ratios determined from sequencing the animals’ protein-coding regions, the exome. Not only did the experimental subjects prefer the exome-matched diet, they ate less and grew faster.

Other articles in this food-focused issue include a Foundations piece about the discovery of IgE, notorious for its role in food allergies, and a profile of UC Davis’s Lindsay Allen, who has devoted decades to researching the importance of consuming an adequate amount of micronutrients, especially vitamin B12, and has developed a method for assaying the B vitamin–content in human breast milk. Another UC Davis professor is our Scientist to Watch. A farmer’s daughter, Amélie Gaudin studies environmental stress and root ecology with the goal of improving crop yields.

Soil ecology and farming practices are an important part of “Plastic Pollutants Pervade Water and Land," a feature by Ee Ling Ng, a scientist who manages a research center devoted to the promotion of “healthy soils.” Describing the massive inundation of plastic pollutants, Ng drills down on the nano- and microplastic particles found in consumer products and that result from the degradation of larger plastic debris. The opening photo will give you pause: Chinese fields covered to the horizon in rows of plastic sheeting, meant to encourage crop growth in areas that are less than ideal for farming.

Pottery from ancient Greece often featured depictions of food, so I’ll leave it to a man of that time, Hippocrates, to enunciate its importance: “Let food be thy medicine, thy medicine shall be thy food.”