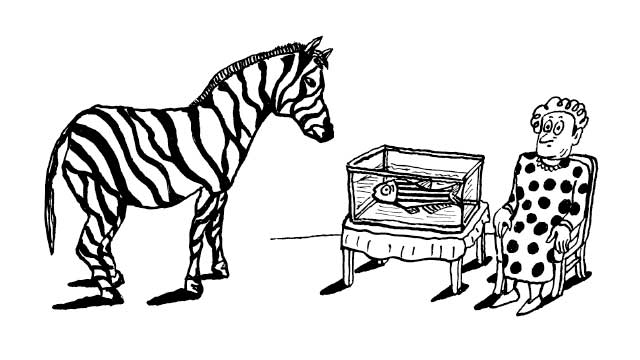 As the May installment of the magazine came together, I realized that a number of this issue’s articles are about patterns. Not just immediately visible ones like the stripes on a zebra, but more subtle cycles that repeat over and over again.

Noticing that the world is full of patterns has surely been central to the evolutionary success of human beings. Early cave painters depicted the spotted hides of the animals they hunted. Those hunters no doubt observed how the skins made the animals harder to pick out from the surroundings. They saw that life around them unfolded in generational cycles, and constructed creation myths to deal with what they saw and with what they feared because they could not understand it.

Before science became a formal discipline, close observation of the natural world and a keen desire to figure out what gave the patterns form and...

Two of the articles in this issue deal with developmental biology. Historically, embryology undergirds the discipline, which began in antiquity with writings by Hippocrates and Aristotle, and continued to rely heavily on patterns gleaned from the study of comparative anatomy. “Embryonic Evolution Through Haeckel’s Eyes” recounts how Ernst Haeckel promulgated the biogenetic law (almost a mantra), “ontogeny recapitulates phylogeny,” using his illustrations of vertebrate embryo patterns to drive home his point that embryos of more advanced species passed through stages mirroring vertebrate evolution. (Haeckel’s law was discredited because it relied on embryos’ resemblance to adults of the various species.)

And then there are the more familiar patterns of an animal’s stripes, the development of which is being revealed thanks to advances in microscopy and genomics that took dev bio down to the cellular level. “Macrophage Messaging” reports on a study of stripe formation in postembryonic zebrafish, where macrophages deliver vesicles loaded with cellular signals to the melanocytes that then organize into the patterns of black stripes that give the little fish its name.

Until 30 years ago, evolution, proposed after close observations of fossil patterns in rock strata and species distributions among islands, was thought to be inexorably slow, taking place over eons. Senior Editor Jef Akst reports on the process of rapid, or contemporary, evolution: biologists can, in their own lifetimes, actually witness species change. With examples reported for dozens of animals, the concept is now well-documented, and researchers have moved on to sorting out the consequences of rapid evolution at the ecosystem level. “The complexity of both ecosystems and evolutionary theory makes these dynamics very challenging to dissect, however,” Akst writes. “In addition to the logistical limitations of the research, there are also theoretical chal­lenges.” But aficionados of the field are optimistic. As one scientist puts it: “In part, it’s just a matter of waiting for the data to accumulate. . . . One generation is the speed limit.”

Robert Hooke and Santiago Ramón y Cajal would certainly love the Lab Tools on machine-learning algorithms that make a cell biologist’s life much more productive by number-crunching large amounts of data on a cell’s structural and functional aspects after a little training from their human users. It’s fun to imagine those two icons liberated from hunching over a microscope, eyes darting from the lens to the paper on which they drew the patterns they saw in plant cells and brain slices.

Zeroing in on the form and function of patterns in nature reveals broader truths. Another scientific icon, Richard Feynman, beautifully summed this up when he closed a 1964 lecture thus: “Nature uses only the longest threads to weave her patterns, so that each small piece of her fabric reveals the organization of the entire tapestry.”