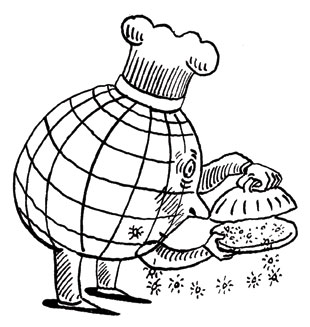 ANDRZEJ KRAUZEMost cultures have creation myths looking back to a time before life existed, assuaging a universal longing to know from whence we and our world came.

Will scientists ever be able to write a complete origin-of-life story, one based on incontrovertible facts? The opening chapter would require a journey way back in time to when Earth formed some 4.5 billion years ago, oxygenless, pocked with spewing volcanoes, bombarded with asteroids. Yet, somehow life appeared on this planet. Chemistry begat biology. Cells formed from a soup of simple molecules. By 3.5 billion years ago, microbes, perhaps similar to contemporary organisms, existed on Earth. How did that happen? How fast? And where?

A host of researchers from myriad disciplines—geologists, microbiologists, geneticists, astrobiologists, computational biologists, biochemists, and synthetic biologists—are adding fascinating details to the story. This issue of The Scientist offers a glimpse of some of the most current origin-of-life...

When Stanley Miller famously isolated a few amino acids from his lab-concocted prebiotic soup, his University of Chicago advisor, Nobel laureate Harold Urey, reportedly remarked, “If God didn’t do it this way, he missed a good bet.” Sixty years later, biochemists are mixing all sorts of simple molecular ingredients presumed to have existed on a prebiotic Earth, with the aim of cooking up the nucleotide monomers of information-bearing molecules that could evolve and give rise to the first proto-cells. In “RNA World 2.0,” Senior Editor Jef Akst lays out the most recent research on how RNA could have formed from a “dirty” mixture that also contained amino acids and fatty acids, and how these early molecules may have cooperated to lead to the cell-based life we see today.

Three articles in the issue illustrate the power of using gene sequences to unlock the history of life on Earth. “Discovering Archaea, 1977” recounts how Carl Woese rocked the foundations of evolutionary biology by using ribosomal RNA (rRNA) sequences to construct a new phylogenetic tree of life with three, rather than two, domains: bacteria, eukaryotes, and archaea. Interestingly, his onetime postdoc and 1977 coauthor of the seminal paper, George Fox, wonders if Woese might have failed to recognize archaea as a new domain had they used modern sequencing techniques instead of gel electrophoresis.

More-recent discoveries of giant viruses with massive genomes have the potential to shake up evolutionary biology once again. Truly giant viruses, with bigger genomes than many bacteria and archaea, escaped detection for decades because microbiologists defined viruses, in part, by their ability to pass through filters with pores 0.2 μm in diameter. Didier Raoult (“Viruses Reconsidered”) describes the discovery of these megaviruses (0.4 μm) that, among other surprises, contain genes encoding the translational machinery for their rep­lication. Woese added archaea to the tree of life based on rRNA sequencing. Viruses have no rRNA, and most biologists do not consider them to be living organisms. But Raoult argues that phylogenetic trees based on transfer RNA and RNA polymerase genes “show that viruses are at least as old as the three traditional domains proposed by Woese” and may warrant classification as a fourth branch of life.

Sitting at the base of the three-domain tree is our last universal common ancestor (LUCA). What researchers can say today about the makeup of LUCA is a direct result of the availability of gene sequences from so many species. Aaron Goldman writes that “LUCA is not [Darwin’s] ‘primordial form,’ but rather a sophisticated cellular organism that, if alive today, would probably be difficult to distinguish from other extant bacteria or archaea.”

So, the scientific origin-of-life story is a biography still unfolding, not yet ready to publish in full. But learning how researchers are filling its pages is nothing short of spellbinding.