As we all continue to grapple with the disruptive reality of the COVID-19 pandemic, most people are focused on the present and the near future. Will schools open in the fall? Are vaccine trials delivering promising results? When will this nightmare end, and what will the world look like in its aftermath? Not as much of our collective attention is being paid to the past. But the turbulent first half of 2020 has shown us that without the proper appreciation for the past, we are in danger of repeating mistakes or perpetuating injurious patterns.

Most recently, individuals across the world have been wrestling with systems in which the subjugation, oppression, and enslavement of entire groups of people has been commonplace for centuries. Properly contextualizing and understanding this shameful history is an obvious first step towards creating a better world and more loving societies for everyone. Absent this grounding in the past, a brighter future, free from racist ideologies and the scars they left, is virtually impossible.

A well-informed view of history might similarly facilitate living through and learning from the ongoing pandemic. Some commenters early on in the spread of COVID-19 offered hasty (and false) reassurances that COVID-19 was comparable to seasonal influenza. Claims that SARS-CoV-2’s prevalence would wane with the warming months of spring or that it wouldn’t exact a toll much beyond that of a bad flu season turned out to be wrong, as many people pointed out when such assertions were first voiced. But a little more than a century ago, a worldwide influenza pandemic killed at least 50 million people and perhaps as much as 100 million people. Studying the 1918 flu pandemic may help modern citizens, which comprise the descendants of those who survived that global catastrophe, cope with our own pathogenic present and future.

Experts aren’t sure where and when the 1918 flu outbreak started. An early cluster of cases on a US military base in Kansas could have been ground zero for the pandemic. The illness only became known as the “Spanish flu” as unfettered reports of infections and deaths emerged from Spain, which remained neutral throughout the course of the world war that had been raging in Europe for four years. In countries that were combatants in that multinational conflagration, the considerations of wartime propaganda and the projection of national strength outweighed the need to provide accurate and up-to-date epidemiological information on a disease that was racing rapidly around the globe.

If this obfuscation, which was aided by media outlets acquiescing to political strategies in warring countries, had been tempered by an urgency to disseminate quality health and disease information, perhaps the dreadful tide of the flu pandemic could have been stemmed to a degree. Today, politics and finger pointing are similarly hobbling the world’s ability to mount and sustain a robust and effective response to a widespread disease. Recently (July 21), with the US accounting for more than 25 percent of confirmed COVID-19 cases globally and about 23 percent of deaths from the infection, President Donald Trump downplayed the situation, tweeting: “You will never hear this on the Fake News concerning the China Virus, but by comparison to most other countries, who are suffering greatly, we are doing very well - and we have done things that few other countries could have done!” And prior to this tweet, the Trump administration announced a policy shift that has hospitals bypass the US Centers for Disease Control and Prevention (CDC) to send all COVID-19 patient information directly to a central database in Washington, DC. The CDC had shared its COVID-19 tallies publicly on its website, and cutting out this well-established, independent federal science agency from the process of reporting health information cast those data into the shadows of a political town.

Even if global politics seem to be repeating the mistakes of the past, medical care and science have made much progress in the century between these two pandemics. Right? Physicians in 1918 had essentially no evidence-based treatments—not even IV fluids, respirators, or vaccines—for the debilitating flu that seemed to sicken and kill both young and old. Some doctors and public health experts championed alcohol, laxatives, and bloodletting as treatments. Science wouldn’t even discover viruses, never mind that the causative agent for the 1918 pandemic was the H1N1 strain of influenza, for another couple of decades. Today, scientists were quick to identify the agent causing COVID-19, and researchers were doing detailed genomic analyses of the virus within weeks of the outbreak starting. But still, public figures have been proposing nonsensical treatments, such as silver-containing products and commercial disinfectants.

As we bide our collective time until a COVID-19 vaccine is developed, tested, and disbursed, public health agencies around the globe have been recommending social measures that mirror what the public was asked to do during the 1918 pandemic. We are asked to practice physical distancing, to wear masks, and to curb social activities such as dining out, shopping, and bar hopping, just as our ancestors were during the uncertain times of their own global health catastrophe.

When the 1918 flu hit San Francisco in September of that year, city leaders quickly enacted school closures, mandated mask wearing, and forbade gatherings, among other measures. Although the city recorded more than 2,000 cases of flu by mid-October, infections seemed to be trending downward, and the mask ordinance was annulled in late November. But flu cases began to rise, and by mid-January 1919, the city again mandated public mask wearing. Just one week later, the Anti-Mask League held a meeting that an estimated 4,000–5,000 people attended. This organization presented a petition to San Francisco’s Board of Supervisors, and the mask ordinance was lifted citywide on February 1. The city would end up recording almost 45,000 cases and more than 3,000 confirmed deaths from the pandemic flu.

We are seeing these mistakes and others replaying in the US now. Young adults, often unmasked, crowd dance clubs, beaches, and bars, while vocal anti-mask factions have arisen in some localities and governors are suing mayors who seek to mandate mask wearing in their cities. And we might have avoided these pitfalls if we had a more robust appreciation for the history of pandemics past.

Will we start to heed warnings from previous episodes of infectious peril as we find ourselves still very much in the thick of the COVID-19 pandemic? I’m not terribly hopeful. But perhaps we can wrest some sense and strategy from our current and near-future experiences to help guide us through the next pandemic. My suspicion, based on solid scientific evidence from researchers who study emerging infectious diseases, is that it will not take another century for another one to befall us. 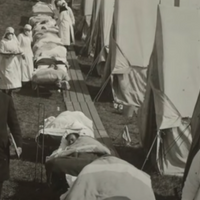