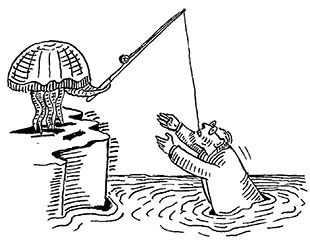 ANDRZEJ KRAUZEIt’s August and deep into summer. Along the Atlantic coast, reports of shark attacks and stinging jellyfish invasions have beachgoers wary. The wildly popular but infamous Discovery Channel series Shark Week just concluded, stoking its usual quota of irrational fear, even though this year’s programming did include some more nods to actual science. Sharks aren’t just fodder for sensationalist filmmakers: how they and other marine creatures live in their watery world has fed the imaginations of biomedical engineers looking to design better medical techniques and products by mimicking nature.

In this issue’s cover story (“Inspired by Nature”), Daniel Cossins describes how shark-skin denticles inspired the construction of antibacterial surfaces; how jellyfish tentacles influenced the design of a technique for snagging rare cancer cells circulating in the bloodstream; how mussel proteins that harden underwater to attach the mollusks to rocks can serve as an effective...

Nature plays muse to all scientists and still harbors many a secret in need of decoding.

Of course, nature plays muse to all scientists and still harbors many a secret in need of decoding. In the field of developmental biology, the unique and largely unexplored functional properties of an unusual (and transient) organ is the subject of “The Prescient Placenta,” by Christopher Coe, who details some of the maternal-fetal crosstalk necessary for mother and child to enjoy a successful pregnancy outcome.

Another developmental biology subject has recently become more mysterious—the embryonic origin of the lymphatic system. For a century, blood vessels were deemed the source of this unique drainage system that plays a critical role in immunological defense. Four recent papers that question this dogma are the subject of a special literature review by TS intern Amanda B. Keener.

By humanizing mouse tissues and immune systems, scientists are now improving the study of many diseases and the efficacy of drug testing, which will hopefully help investigators avoid many late-trial deleterious outcomes. (See “The Human Touch.”)

Epigenetics is the subject of two articles: a profile of Wolf Reik, a founding father of the field and witness to its progress from tedious biochemical measurement of genome methylation patterns to rapid whole-genome methylation sequencing in single cells ( “Leaving an Imprint”); and a Lab Tools detailing new computational techniques for decoding the consequent flood of epigenetic data (“Messages in the Noise”). This month’s other Lab Tools, “Get With the Program,” offers tips on how to dip your toes into computer coding to help customize analyses of these and other enormous data sets.

And finally, a real heads-up article. “Drugging the Environment” traces the journey of pharmaceuticals after manufacture, and the trail is a dispiriting one. Runoff from manufacturing facilities; drugs excreted unmetabolized from the human body and flushed down the toilet, or thrown unused into the trash; and pharmaceuticals pooped out by livestock—all make their way into the ecosystem, where researchers are just beginning to document their effects on wildlife.

So if you’ve been spooked into staying above the high-water mark at the beach, there’re plenty of true-life (and sometimes scary) stories in this issue to keep you occupied. 