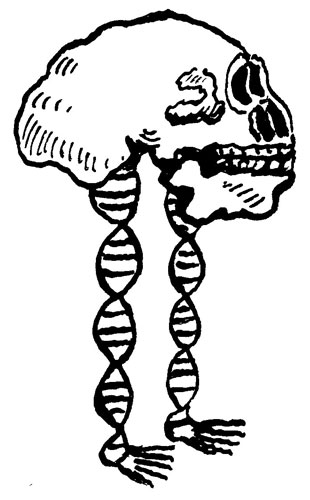 ANDRZEJ KRAUZEOrigin myths are foundational to the world’s cultures—depicted in cave paintings and later written or spoken. The fascination with origin stories lives on in modern humans, especially in a subgenre of such tales: how Homo sapiens got to be top dog. Dozens of print and film offerings inventively portray how the transition from tree-dweller to upright hominin might have played out—think Clan of the Cave Bear,The Ugly Little Boy, Iceman, Quest for Fire, and The Croods, to name but a few. Luckily, scientist debunkers are on the case.

Paleoanthropologist Ian Tattersall lays out the many factors, not least of which is our sometimes myopic fascination with our own species, that have complicated the drawing of any sort of reliable hominin evolutionary tree in an essay in this issue.

The ancient-DNA revolution, in essence, offers powerful new tools for recreating the biological past, for humans and for other organisms whose genetic material is decently preserved due to favorable environmental conditions. And the new methods even have something to offer to forensic scientists, whose crime-scene collections often include similarly degraded DNA. Adios, creative alibis.

Origin stories clearly fascinate Wim Hordijk, a peripatetic, independent computational biologist who seeks to model the emergence of life from the basic chemistry present on early Earth. In “The Living Set,” Hordijk considers the possibility that life began through the formation of autocatalytic sets—self-sustain­ing networks of chemical reactions that create and are catalyzed by components of the system itself.

Before you read neuropsychologist Stuart Anstis’s feature “Seeing Isn’t Believing,” move the opening image up and down. What’s the neurological basis for the phantom movement you see? Anstis studies motion illusions and how they trick the visual system “because seeing the errors that a system makes can help us to understand how that system works nor­mally. Visual perception goes far beyond our retinal images, which provide only partial sensory information. We use our knowledge and expectations of the world to fill in the gaps,” he writes. You can read about the various illusions he and others have parsed, and then go to the-scientist.com and try them out yourself. Anstis’s research is helping to write the story about how our eyes and brains evolved.

This issue also contains a number of articles that touch on RNA, an origin-story molecule if there ever was one. The study of RNA’s functional roles is turning up some interesting surprises. Articles in The Literature department touch on transcriptional control of noncoding RNAs in embryonic stem cells and a muscle-regulating micropeptide coded by a supposedly noncoding RNA. A Lab Tools article, “An Array of Options,” weighs the pros and cons of RNA-seq versus microarrays for studying the transcriptome, while “RNA Structuromics” describes a new method for determining RNA secondary structure in vivo.

We set two of this issue’s stories, “What’s Old Is New Again” and “A Plague on Pachyderms,” in motion with a pair of TS Live videos that will premiere on the-scientist.com this month. Humanity’s mythologies have monopolized the imagination for millennia, but as technological advances allow science to probe ever deeper into biology’s past, present, and future, those origin stories, and even early logic-based attempts at explaining our world, may need rewriting. 