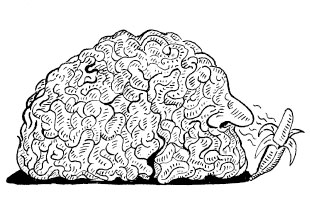 ANDRZEJ KRAUZEBananas. That’s what I thought I was when I realized that I couldn’t smell the fruit’s unique odor. Nor could I smell the obviously soured milk in my refrigerator or the exhalations of smokers on the city sidewalks. Gourmet meals were now wasted on me, where once I had loved teasing apart their flavors. This affliction went on for months, long enough for me to seek medical help, which ruled out anything awful but offered no cure. Only much later, after a course of antibiotics taken for something else, did my sense of smell return.

So why am I telling you this? Every November, The Scientist focuses on neuroscience, and we pick out some new and exciting developments in the field to zero in on. In choosing this year’s cover, we turned again to the artwork of Greg Dunn, a former neuroscientist whose stunning painting of...

For this month’s issue, Notebook section editor Bob Grant had assigned two articles related to altered senses of smell. The first, by Senior Editor Kerry Grens, took me right back to my own period of odor disturbance. She describes a serendipitously discovered treatment for smell restoration that involves sniffing a collection of aromatic oils. After weeks of this therapy, the sense of smell reappears for some 30 percent of people. How it works remains unclear, but the potential for recovery likely relates to the constant regeneration of sensory neurons in the nose.

In another twist on olfactory neuronal plasticity, Senior Editor Jef Akst reports on research showing that male mice continually exposed to the scent of female urine change their behavior toward females, seemingly as a result of losing a male-specific subset of neurons from their odor-processing organ. Coincidentally, those researchers monitored the changes in the neuron population using light-sheet microscopy, a technology that is the subject of one of this month’s Lab Tools.

As always, neuroscience is a gold mine of interesting research. One intriguing component of neural health is the role of diverse immune cells. Contrary to the long-held belief that the central nervous system is sheltered from the body’s immune system except in response to injury, researchers now recognize that T cells, macrophages, and other defenders reside in the brain and spinal cord, affecting not only pathogen defense, but also behavior, learning, and memory. Amanda Keener (“Immune System Maintains Brain Health”) reports on the good-cop role played by these immune cells and what happens when they go rogue.

Other neuro research covered in this issue includes a technique called MAP-seq, which uses mRNA barcoding to rapidly track single neuron pathways over long distances in the brain; a newly discovered neural network involved in the control of breathing; and findings about synaptic vesicles’ ability to release their contents even in the absence of a structural network at the axon’s end. There is also a profile of University of Pennsylvania neuroscientist Amita Sehgal, who studies the genes that regulate circadian and sleep rhythms (here); a Scientist to Watch article about olfactory researcher Jason Castro of Bates College; and a Foundations description of the invention of two-photon microscopy.

I look forward to nosing around the annual Society for Neuroscience meeting later this month. With a cast of tens of thousands and mountains of new research being unveiled, the conference is always an exciting way to discover what’s grabbing neuroscientists’ attention (and a sneak peek at what you’ll be reading in future issues of The Scientist).