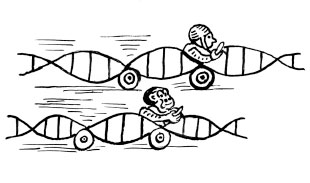 ANDRZEJ KRAUZE“As I was walking along I met two large tortoises, each of which must have weighed at least two hundred pounds: one was eating a piece of cactus, and as I approached, it stared at me and slowly stalked away; the other gave a deep hiss, and drew in its head. These huge reptiles, surrounded by the black lava, the leafless shrubs, and large cacti, seemed to my fancy like some antediluvian animals.” Thus Charles Darwin described the September 1835 scene that greeted him on Chatham Island (now San Cristóbal), the first of the Galápagos archipelago he visited.

As this issue of The Scientist is rolling off the printing press, I will be in the Galápagos, excited that I might be walking in some of Darwin’s footsteps, hoping to witness something close to what he saw. Most fittingly, Beagle is the name of the small boat on...

Darwin’s visit to the different volcanic cones that form the Galápagos Islands was pivotal to the development of his theory of evolution by natural selection. Yet he cogitated for more than 20 years before publishing On the Origin of Species in 1859. His HMS Beagle research journals came out the following year. And it took another 12 years before he released The Descent of Man, his thoughts on the subject of human evolution. In the book’s introduction, Darwin describes his fear that addressing the topic would “only add to the prejudices against my views.”

Since Darwin’s time, there has been no dearth of scholarship about human evolution, and our August issue offers two features devoted to the subject. In “Decoding Human Accelerated Regions,” Katherine Pollard describes her quest to identify the function of short regions of the human genome that differ from our closest living relative, the chimpanzee, with whom we share 99 percent of our DNA. These so-called human accelerated regions are conserved among much of the animal kingdom, but have evolved dramatically in human ancestors after they split from other primate lineages. Many seem to function as genetic enhancers regulating gene expression during embryonic development in uniquely human parts of the brain and body.

John Hawks writes about the evidence for ongoing evolution in modern human populations in “Humans Never Stopped Evolving.” Combining public-health data with genomic studies will enable researchers to discover more ways humans are evolving, beyond the well-known examples of skin and eye color, lactose tolerance, and blood differences in response to malaria risk. “New evidence of how the human genome has changed over the last several thousand years points to series of massive critical evolution­ary changes, setting some aspects of our biology clearly apart from that of our forebears. And we are no doubt continuing to evolve today,” says Hawks.

But are we evolving quickly enough to keep pace with our advancing society? João Pedro de Magalhães (“Opinion: Our Inner Caveman”) argues that our globally connected modern world is still ruled by behaviors forged during the time of our early human ancestors, when “harsh conditions fostered coopera­tion within small groups, often made up mostly of one’s relatives, thus favor­ing strong social bonds.” Pundits from many disciplines have commented on how the survival instincts driving tribal social behavior get activated in today’s populous, multicultural settings, and these ideas certainly seem relevant to the confusion and dismay caused by the Brexit vote, the US presidential race, and a spate of violent attacks around the world.

Also on the subject of evolution with interesting implications for human behavior is a Thought Experiment by Jacqueline Dillard and David Westneat that describes the close evolutionary connection between monogamy and cooperation.

Every marine iguana, blue-footed booby, and little finch I encounter on my visit (a dream trip for any life scientist) will hammer home the long arc of evolution, from Darwin’s “tangled bank” to the continued shaping of our human selves.