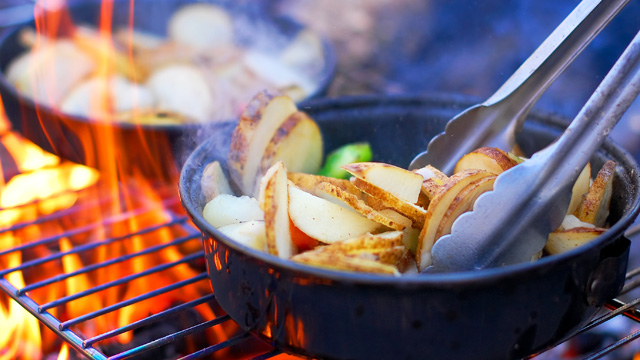 When Alice went down the rabbit hole, she had some mighty strange adventures feeding herself: a quaff from a bottle labeled “Drink Me” and she began “shutting up like a telescope”; a nibble of a cake marked “Eat Me” and she was suddenly “opening out like the largest telescope that ever was!” Clearly possessed of an iron stomach, she went on undeterred to one adventure after another.

Eating behavior at the cellular level is the topic of features this month. “Curiouser and curiouser” truly describes the molecular bases for the very different types of digestion discussed in the two articles. In “The Enigmatic Membrane,” Muriel Mari, Sharon A. Tooze, and Fulvio Reggiori review the latest research on the mysterious origins of the double-bilayer membranes of a unique cellular organelle—the autophagosome. When a cell is infected, stressed, or starving, it gets an “Eat Me” signal that...

While such self-cannibalism is normal, there can be dire consequences when it goes awry. Similarly, when enzymes made to digest food are activated inside cells instead of in the gut, serious disease can result. In “The War Within,” Ole Petersen, Oleg Gerasimenko, and Julia Gerasimenko review the pathobiology of acute pancreatitis—an excruciatingly painful condition in which activated digestive enzymes are released inside pancreatic cells, destroying the cells of that organ and surrounding tissues. As knowledge of the molecular triggers of such activation increases, so does hope for effective treatment options.

When digestive enzymes are activated inside cells instead of in the gut, serious disease can result.

What else is on the plate? In this month’s Thought Experiment, Dennis Selkoe and John Morris issue a call to Alzheimer’s disease (AD) researchers: move the search for effective AD therapies forward by designing clinical trials that employ well-characterized AD biomarkers to choose trial subjects and to monitor new drugs. And the search for new, even easier-to-assay biomarkers is the subject of the Modus Operandi column, which describes a new technique that identified serum antibodies unique to AD patients.

When it comes to the state of science education in the United States, there’s also plenty to chew on. At the end of 2010, the President’s Council of Advisors on Science and Technology (PCAST) sent President Obama a report, Prepare and Inspire, containing recommendations for improving science, technology, engineering, and math (STEM) education in grades K through 12. But even if students enter college “prepared and inspired,” there’s a problem that needs critical attention. While the number of US students obtaining college degrees in science, technology, engineering, and math has increased, the percentage of STEM graduates remains flat. And that’s because so many students enter intending to major in science but drop out after their first two years. Why? According to one study: “Of the 23 most commonly cited reasons for switching out of STEM, all but 7 had something to do with the pedagogical experience.”

This month PCAST is issuing a set of recommendations about how to tackle this problem. It is aptly titled Engage to Excel: Producing One Million Additional College Graduates with Degrees in Science, Technology, Engineering, and Mathematics (STEM). Our Critic at Large author, Sarah L. Simmons, explains how a number of existing programs have successfully “engaged” undergrads by introducing them to hands-on research beginning freshman year, resulting in greater numbers of students obtaining STEM degrees.

For after-dinner petit fours, we offer four short reviews of books on the science of gastronomy.