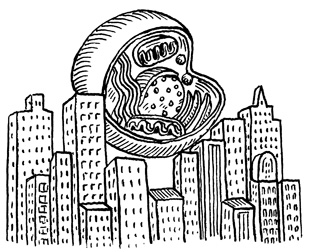 ANDRZEJ KRAUZEFrank Lloyd Wright, the most famous espouser of “organic architecture” (and the one who made the term common parlance), wrote that ideal design results in “a sentient, rational building that would owe its ‘style’ to the integrity with which it was individually fashioned to serve its particular purpose.”

Organic architecture usually results in something curvy and sinuous. Most architects inspired by biology base their work on multicellular organisms, such as an orchid or a cactus, for example. Some employ biomimicry in their blueprints, taking lessons from termite nests to cool a building naturally and efficiently or from the honeycombs of bees to produce structural strength. There is even a building whose design is inspired by living cells and their multitude of organelles: the future home of the Institute for Nanobiomedical Technology and Membrane Biology in Chengdu, China.

While Wright had actual building design in mind...

Although cell biology is now growing into a more interdisciplinary field, it was founded by microscopists. In “One Man’s Trash . . .,” Kerry Grens reports on the new appreciation of the long-maligned midbody—variously called “a garbage dump,” “a remnant,” “a scar”—first identified in 1891 by German anatomist Walther Flemming during his detailed study of mitosis. The electron microscope didn’t make its debut until some four decades later, after which the organelle became “impossible to ignore,” writes Grens. Now known to be composed of hundreds of proteins, many important for cell division and perhaps, in some organisms, cell fate, the midbody is the subject of hot debate, ably recounted in this feature. (Also see “Truth and Beauty,” The Scientist, April 2012.)

Array tomography and mathematical modeling have led to breakthroughs in understanding organelle structure, such as the intricate folds of the endoplasmic reticulum, reported in The Literature. The combined techniques showed that the organelle is stacked like a spiraling parking garage, with the different levels connected by twisted “ramps” of membrane.

And it’s not only the genesis and geometry of organelles in living cells that is capturing researchers’ interest. This month’s Modus Operandi column, which is dedicated to reporting new techniques of interest, describes the building of a protocell with its own functioning proto-organelle inside. The eventual goal of such bottom-up work is to use simple component parts to design cells with complex, controlled behaviors.

There’s much more of interest to read in the issue: the Top 10 Innovations of 2013 (there are 12 on the list this year due to ties); tips for battling mycoplasma contamination of cell cultures; reports on tracking climate change using museum specimens and identifying microorganisms in the NYC subway system using next-gen sequencing techniques; and the story of a 1911 Antarctic expedition to collect penguin embryos to find out whether ontogeny really does recapitulate phylogeny.

Happy holidays to all, and we look forward to bringing you all the best in life science in 2014.