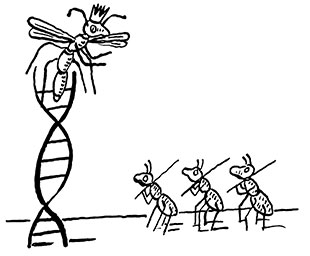 ANDRZEJ KRAUZESoldier ants and worker bees made Darwin scratch his head. How to explain the comportment of insects that live in social groups—catering to the colony’s queen, nursing her eggs and larvae, foraging for food, defending the nest—yet never getting to have their own offspring? In this month’s cover story, “The Genetics of Society,” Claire Asher and Seirian Sumner describe the growing field of sociogenomics, which uses information gathered from genome sequences, epigenetic patterns, and transcriptome and proteome analyses to suss out how a seemingly identical genome can account for observed forms of caste-specific behavior. It’s a story of rapid gene evolution and differential gene expression. “The organization and col­lective decision making of eusocial insects is even yielding new insights into human behavior and what it means to be part of a society,” write the authors. Darwin would have loved this.

Although human behavior is much...

One type of stress that affects all organisms is pathogenic infection. The well-tuned vertebrate immune system employs two strategies to deal with invaders: an immediate and nonspecific innate response, and an adaptive response tailored to the particular pathogen. Prokaryotes facing down an invader were thought to mount nothing more than a fairly simple innate immune response. Eugene Koonin and Mart Krupovic (“A Movable Defense”) recount the pivotal role of mobile genetic elements such as transposons in the establishment of adaptive immunity in bacteria and archaea. A snippet of an invader’s DNA is inserted into a specific region of a host’s genome, the CRISPR cassette, with the help of the Cas1 enzyme; subsequent infection with the same parasite activates the CRISPR-Cas system to produce small RNAs called CRISPR targeting RNAs (crRNAs) that direct the destruction of the invader’s genome. In other words, prokaryotes can remember a particular infection and mount a specific counterattack upon reinvasion. What’s more, this knowledge is passed on to subsequent generations. From extensive comparative genomic studies, Koonin and Krupovic have found that a family of transposons they call casposons lies at the base of the phylogenetic tree in which Cas1 is found: these mobile genetic elements are apparently early ancestors of prokaryote adaptive immunity.

CRISPR-Cas systems—all the rage these days for precision genome editing—are ancient prokaryotic defense mechanisms. But did you know that cheese and yogurt manufacturers rely on the immune systems of bacterial starter cultures to attack viruses that can ruin dairy products? Associate Editor Kerry Grens describes the vaccination of bacterial strains to ramp up their CRISPR-Cas systems, making them better pathogen destroyers and saving businesses a ton of money in the process.

Further insights into the mechanisms of group living and defense against outsiders lie in wait, whether they’re buried deep in the genomes of people suffering social stress, in the epigenetic programs of eusocial ant species, or at the bottom of your yogurt cup. This issue celebrates the scientists who are unlocking the secrets of our very social world. 