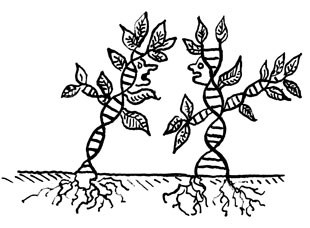 Jack climbed a beanstalk so tall that it could only exist in a fairy tale. Audrey II demands that Seymour feed her larger and larger quantities of human blood in the cult classic Little Shop of Horrors, and venomous, predatory triffids spread like kudzu in the 1951 novel The Day of the Triffids. The 2009 sci-fi movie Avatar even comes with its own guide to the exotic flora of the moon Pandora, where plants communicate with each other via “signal transduction from root to root.”

The panoply of fictional plants offers a large and varied dose of the weird and wonderful. But there’s no need to resort to fiction to find truly unusual plant characteristics.

Our January issue explores some of these unique biological traits. “Researchers have stumbled upon some ‘mind-blowing’ findings in plant genomics,” reports Megan Scudellari in “Genomes Gone Wild.” Plant genomes vary...

Transposable elements also play a part in genome size increase; and plants swap genes promiscuously, taking up foreign DNA from other plants and green algae but spurning genes from animals or fungi. And, of course, plants acquire new genes through the traditional mutation route, with some species boasting record rates.

According to Avatar’s irreverent “xenobiologist” Grace Augustine, “There’s some kind of electrochemical communication between the roots of the trees. Like the synapses between neurons. Each tree has 104 connections to the trees around it, and there are 1012 trees on Pandora.” It’s science fiction, and set almost 150 years in the future on a distant moon, but the ideas about plant communication at least have roots in reality.

In “Plant Talk” Dan Cossins brings together the latest research about how plants communicate both aboveground via airborne chemicals and belowground by means of soluble compounds exchanged between the roots of different plants and via threadlike fungal networks interwoven symbiotically through the roots of most plants. There is even some evidence that plants may relay and “listen” to acoustic messages from other plants. If researchers can decipher “the molecular lingua franca of plant communication. . . . They could then begin to clarify the ecological significance of the phenomenon and, potentially, help farmers grow hardier crops,” Cossins writes. Plants communicating is surely weird and wonderful, but the science behind the phenomena is maturing rapidly. “This idea is not strange anymore,” says one researcher.

Also in this issue, read about bioprospecting for gold using leaves of trees growing atop deposits of the precious metal and a short report on the phenomenon of halotropism: how roots actively grow away from areas of high salinity.

Outside of plant biology, Randal Halfmann discusses a less well-known side of prion proteins, which can misfold and aggregate to form the amyloid fibrils that have been implicated in neurodegenerative diseases such as mad cow, Alzheimer’s, and Parkinson’s. In “The Bright Side of Prions” Halfmann writes of their emerging positive roles in memory formation, in the regulation of translation, and in our innate ability to fight off diseases. That, too, seems weird but wonderful. 