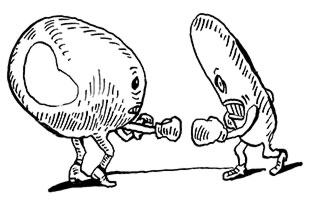 ANDRZEJ KRAUZEWhat would happen in a world without microbes?” ask researchers Jack Gilbert and Josh Neufeld in a December thought-experiment article in PLOS Biology. After considering the intricate interdependencies that exist among our planet’s life forms, the authors conclude that “although life would persist in the absence of microbes, both the quantity and quality of life would be reduced drastically.” To this I would like to add that life-science studies would be a lot more boring. And the feature well of this issue would be empty.

The microbial ancestors from which complex life evolved faced challenging environmental conditions, and their extant relatives continue to astonish with their ability to withstand temperatures, pressures, and radiation doses that would do in any human. So wide-ranging are the adaptations of these so-called extremophiles that they inform the search for life on other planets. That’s why a two-month-long burst of methane...

In a world without microbes, life-science studies would be a lot more boring. And the feature well of this issue would be empty.

In “The Energy of Life,” Jeffrey Marlow and Jan Amend challenge the anthropocentric idea of what constitutes living on the edge, whether it’s at a methane seep on the deep ocean floor, in your backyard soil, or even on another planet. “For the title of ‘extremophile’ to be broadly meaningful, it must refer to a more objective measure of extremeness—an advantageous capability enacted in response to a common chal­lenge,” they write. “One such challenge . . . is the acquisition of chemical energy to drive cellu­lar reactions. Perhaps the ways in which organisms handle this task could separate the truly industrious from the merely viable.” In their view, “the Martian subsurface . . . may lack easily obtainable energy sources, but with relatively few apparent hazards, a low-energy way of life could be feasible.”

Viruses, the smallest of the microbes, need a host in which to replicate, a host that can be another microorganism, such as a bacterium or another virus, or the cells of a macroscopic animal such as a human. Viral infections often cause acute damage until the immune system is able to clear the infection. But some viruses can persist within their hosts, flying under the radar, sometimes for a lifetime. In “Viral Virtuosos,” Christopher Sullivan describes a fascinating mechanism by which certain viruses use microRNAs, both viral- and host-encoded, to enable persistent infection or to initiate viral reproduction when the host cell is no longer a good hideout. Be sure to check out the accompanying TS Live animation on the-scientist.com.

Finally, in a world that had no microbes, would immune defenses even be necessary? We certainly wouldn’t be publishing a feature about the newly recognized abilities of the innate immune system to remember previously encountered microbial foes. While immunology dogma attributes memory of an infection only to the T and B cells of the adaptive immune system, there is mounting evidence that first-line immune defenders such as monocytes and natural killer cells retain some kind of memory of previously encountered pathogens. In “Thanks for the Memories,” TS correspondent Ruth Williams reports on memory priming of these innate immune cells.

So, thanks to the existence of microbes, our world, not to mention our feature well, is full of stories that are far from boring.