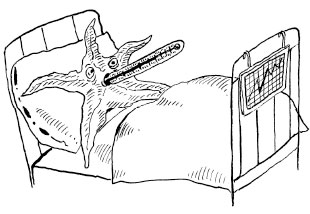 ANDRZEJ KRAUZEJuly always puts me in mind of the doo wop refrain: Summertime, summertime, sum sum summertime (my favorite version). My family decamped to the Jersey Shore every summer, and the months I spent there left me with a lifelong love of the ocean: beachcombing for hours to see what the sea had spit onto the sand, surfcasting for bluefish or yummier blowfish to cook for dinner. Later, on trips to warmer climes, snorkeling on the Great Barrier Reef and diving in the Caribbean revealed technicolor coral reefs and fishes as astonishingly beautiful as the marine organisms pictured on this month’s cover.

But the oceans of my youth mean something different to me now—less mysterious on some levels, yet even more fascinating. Much more is known about their denizens, thanks to marine scientists and advances in research technology: undersea exploration vehicles can probe to extraordinary depths;...

Unfortunately, a lot of what marine biologists are learning is alarming. In “Changing Oceans Breed Disease,”  science writer Christie Wilcox reports on the effects of rising ocean temperatures and acidity on a wide range of sea creatures. “The barrier reef north of Cairns will not look again how it did in my lifetime,” Terry Hughes, director of the Australian Resource Coun­cil’s Centre of Excellence for Coral Reef Studies, told Wilcox about the worst coral bleaching event ever to hit the northern part of the Great Barrier Reef. And the warming and acidifying seas appear to be contributing to a spike in diseased animals from sea stars to lobsters, from fishes to humans.

Other articles in this issue also focus on marine research. Behavioral ecologist Peter Tyack, this month’s profilee (here), has spent four decades listening to whales sing and dolphins communicate with their companions, and studying how cetaceans have recomposed their songs to deal with man-made noise—from ship engines, oil rigs, and naval sonar. Scientist to Watch Tessa Hill, of the University of California, Irvine, plots the corrosive effects of ocean acidification on mussels growing in the lab or in tidal pools on California’s coast. See also reports of recent publications on the role of archaea in seafloor sediments and a method for studying amino acid assimilation by coastal bacterioplankton, and read about deep reefs discovered off the mouth of the Amazon River and elsewhere  and the 1874 documentation of a complete giant squid specimen.

As coral reefs offer habitats for an incredible variety of species, special niches in the human body harbor the tissue-specific stem cells necessary for replacing old or damaged cells. And similar to the symbioses so vital to life in reefs, the participation of the body’s immune cells is necessary to keep those tissue-renewal processes running smoothly. Read about it in “Immune Cell–Stem Cell Cooperation.”

Both Lab Tools articles focus on statistics and data mining. “Composite Endpoints in Clinical Trials” examines the use and misuse of composite endpoints in clinical trials and how to make such endpoints meaningful. “The Genetic Components of Rare Diseases” reviews three software tools aimed at making it easier to identify and understand genes and variants involved in rare genetic diseases.

If you visit or swim in one of Earth’s oceans this sum sum summertime, I hope this issue will have you thinking about all that’s going on under the sea.