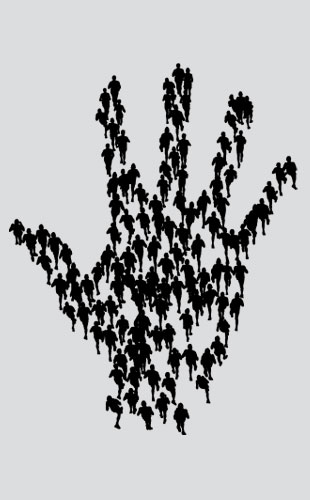 © ACE_CREATE/ISTOCKPHOTO.COMThese days, warnings of worldwide infection seem like monthly occurrences. And they’re not just in the popular press, but in scientific journals and in bulletins from public-health organizations. Think how many times in the last few years we have been told that a new global pandemic is at least possible, if not imminent—warnings fueled by reports of a newly emerging, particularly deadly virus, or a known pathogen accruing some dangerous new mutation. Think of the controversy that raged last year over whether to allow the publication of papers from two laboratories describing the experimental creation of mutated versions of the highly virulent but not easily spread H5N1 avian influenza virus—strains that were more transmissible between mammals. Warnings rang out about possible pandemics should the lab-mutated viruses accidently escape, and about terrorists using information gleaned from the scientific publications to create biological weapons.

How people live with each other clearly has an effect on how infectious diseases are spread. In “Factoring in Face Time,” Adam Kucharski of Imperial College London’s MRC Centre for Outbreak Analysis and Modelling describes how epidemiologists are trying to contain infectious disease in humans by studying how patterns of social interaction influence their spread. The HIV/AIDS outbreak in the 1980s underscored the importance of studying social connections, but the fear of global pandemics has propelled such research forward. Kucharski describes how data from detailed questionnaires and from subjects wearing electronic sensors (that actually record the number of interactions and distance from other people) have helped generate models now precise enough to allow governments and public-health officials to better contain the spread of possible pandemics.

Because the possibility of a new epidemic often involves a newly emerging infectious agent that arises in an underdeveloped region of the globe, how scientists from the developed world plant their boots on the ground there can be critical. In “It Takes a Village,” former TS intern Beth Marie Mole profiles three scientists whose research in developing countries has been intimately involved with, and enhanced by, working with local communities. She describes how Belgian clinician Peter Piot’s work during the deadly and gruesome Ebola outbreak some 35 years ago laid the groundwork for effectively facing the HIV/AIDS epidemic that followed.

Training locals to manage initiatives that range from effective crop rotation to countering water loss due to climate change also extends to the introduction of novel, low-cost methods for monitoring infection. In "Mobile Microscopes," Jef Akst writes about clever, simple-to-operate cell-phone microscopes that can diagnose malaria from blood samples, tuberculosis from sputum samples, and parasitic worm infections from stool samples.

New pathogens aren’t the only ones emerging and mutating to exploit a new world. Science too is changing, rising to new challenges from novel enemies.