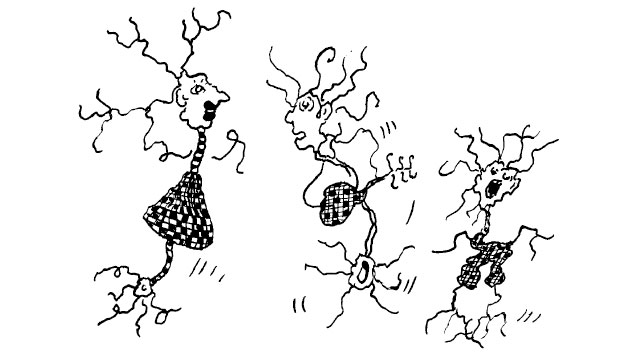 Like the entomologist in search of colorful butterflies, my attention has chased in the gardens of the grey matter cells with delicate and elegant shapes, the mysterious butterflies of the soul, whose beating of wings may one day reveal to us the secrets of the mind.
—Santiago Ramón y Cajal, Recollections of My Life

Based on this quote, I am pretty certain that Santiago Ramón y Cajal, a founding father of modern neuroscience, would approve of this month’s cover. The Spaniard had wanted to become an artist, but, goaded by his domineering father into the study of medicine, Ramón y Cajal concentrated on brain anatomy, using his artistic talent to render stunningly beautiful and detailed maps of neuron placement throughout the brain. Based on his meticulous anatomical studies of individual neurons, he proposed that nerve cells did not form a mesh—the going theory at the time—but...

Fast-forward from the early 20th century to the present day, when technical advances in imaging have revealed any number of the brain’s secrets. Ramón y Cajal would no doubt have marveled at the technicolor neuron maps revealed by the Brainbow labeling technique. (Compare Ramón y Cajal’s drawings of black-stained Purkinje neurons to a Brainbow micrograph of the type of neuron.) But the technical marvels have gotten even more revelatory.

In “Advancing Techniques Reveal the Brain’s Impressive Diversity,” Rusty Gage and two of his postdocs, Sara Linker and Tracy Bedrosian, describe nonvisual methods for delving ever deeper into neurons—analyzing not just what you see, but what you get by performing genome sequencing and transcriptional, posttranscriptional, posttranslational, and epigenetic analyses on single cells. The results of such research paint neurons as tiles in a cellular mosaic. “The human brain contains approximately 100 billion neurons, and we now know that there may be almost as many unique cell types,” they write. “Brain cells in particular may be as unique as the people to which they belong.” To each brain, its own ecology. And a clear picture of the implications of this cellular individuality, they write, “may one day reveal to us the secrets of the mind”—Ramón y Cajal’s ultimate goal.

Also in this issue—November being the month each year when TS focuses on advances in neuroscience—you will find Amanda Keener’s feature about the characteristics of blood vessels in the central nervous system and how they act to restrict access to brain cells. “A real naive view is that the blood-brain barrier is just a wall,” a neuroscientist tells her. “It is a whole series of physical properties that allow the vessels to control what goes between the blood and the brain.” Creative solutions for getting useful drugs into the brain include disrupting endothelial-cell tight junctions with ultrasound waves and microbubbles, and tricking vessels’ transport systems into letting target molecules through. Researchers are now testing these new methods in animal models and 3-D cultures, as well as in human patients.

More articles that underscore the brain’s intricacy include a method for recording the magnetic signals that accompany nerve cell electrical discharges (here); optogenetic and chemogenetic methods for studying behavior in primates (here); how the brains of memory athletes process the prodigious amount of material they must master to win competitions (here); a simple eye exam for early, noninvasive detection and tracking of Alzheimer’s disease (here); and a recent report from the MIT lab of profilee Li-Huei Tsai showing that exposing mouse models of Alzheimer’s to strobe lighting reduced amyloid-β levels by half (here).

What a wonderful ecosystem the brain is, always beckoning scientists to map the secrets locked in its cells. I’ll give Ramón y Cajal the last word: “The brain is a world consisting of a number of unexplored continents and great stretches of unknown territory.”