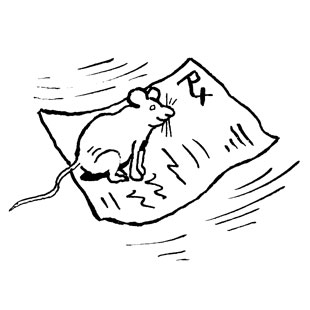 ANDRZEJ KRAUZEFor the past four years, the April issue of The Scientist has focused on cutting-edge cancer research. A look at the four covers gives a taste of each year’s hottest topics. In 2011, molecularly guided melanoma therapies claimed the cover; in 2012, that spot went to cancer stem cells; 2013 featured zebrafish embryos as a new model for the study of cancer dynamics and drug screening; and last year’s April cover was devoted to cancer immunotherapy.

This year’s cover story on mouse avatars, and much of the issue’s other content, focuses on the remarkable progress made in designing cancer therapies that embody the ideals of precision, or personalized, medicine—increasingly patient- and tumor-specific, and often less toxic to normal cells. Both next-generation sequencing data and advances in basic science continue to rewrite the narrative of cancer research. There is now palpable excitement about how new insights...

How personalized can such targeting get when cancer is such a mess of things gone awry? In “My Mighty Mouse,” Megan Scudellari reports on the use of mice engrafted with a piece of a patient’s tumor to home in on the best drug or drug combo to knock out that person’s disease. Several drawbacks still keep this from becoming standard practice, among them the technique’s very high cost and a lack of definitive data illustrating its benefits over current treatment decision making. On the plus side, however, academic and pharmaceutical researchers are using the method with donated material from a wide variety of cancers to test highly targeted, but not exactly individualized, new therapies. And some researchers are devising a fruit-fly model that could be personalized and would be much, much cheaper.

Despite the advances in precision drug targeting, the fact that tumors develop resistance to chemotherapeutics continues to be a major problem. Profilee Charles Sawyers, who codeveloped imatinib (Gleevec), one of the first molecularly targeted anticancer drugs, talks about this problem and the later development of a second-generation drug to treat imatinib-resistant cancers. Next-gen sequencing has allowed researchers to look at changes in the genes of entire signaling pathways to better understand cancer drug resistance. To further fine-tune therapeutic regimens, the National Cancer Institute’s newly launched Exceptional Responders Initiative will sequence the tumors of patients who exhibited remarkable remissions after treatment.

Tumor heterogeneity and the influence of the surrounding tissue microenvironment are two other areas drawing heaps of attention. Cancer stem cells contribute to tumor heterogeneity and seem to resist radiation and chemotherapy. “In Custody” offers tips for isolating and culturing cancer stem cells in order to devise better strategies to take them out. Further evidence of heterogeneity abounds in the study of microRNAs, which are abnormal in all tumors. But findings on miRNAs conflict and seem to depend on the tumor’s environment, as described in “Two-Faced RNAs.” Single-cell sequencing may be needed to more completely understand the implications of tumor heterogeneity.

Even though cancer cells are nefarious warriors, our bodies go to great lengths to stop their forays. Tissues seem to have an evolutionarily programmed arsenal to keep their environment normal. In “Resisting Cancer,” George Klein gives an overview of the various mechanisms we and other animals use to keep cells from dividing uncontrollably and escaping their normal confines.

Last year’s cover story on cancer immunotherapy research is updated in this issue in a Bio Business article, “The CAR T-Cell Race,” which documents the veritable explosion of clinical trials and business investment in chimeric antigen receptor (CAR) T-cell therapies.

At this rate, we should have no trouble picking next year’s cover.