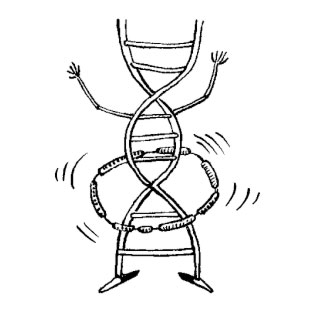 ANDRZEJ KRAUZEWatching Broadway celebrate itself several weeks ago at the Tony Awards ceremony left me idly asking myself: If you were a theater critic awarding a Tony for lifetime achievement as a macromolecule and the nominees were DNA, RNA, and protein, which would you vote for?

For decades (more like centuries), proteins reaped the lion’s share of awards. Then, in the middle of the 20th century, DNA stole the limelight. Biological impresarios Watson and Crick introduced its structure with a tongue-in-cheek understatement in their seminal 1953 Nature paper: “It has not escaped our notice that the specific pairing we have postulated immediately suggests a possible copying mechanism for the genetic material.” That base pairing blew directors away at auditions, and the elegant and functional helical design brought down the house whenever DNA made an appearance on stage.

Putting that elegant structure to other uses has not escaped...

If you were a theater critic awarding a Tony for lifetime achievement as a macromolecule and the nominees were DNA, RNA, and protein, which would you vote for?

In the latest twist on designing DNA nanostructures, dubbed DNA origami, a long strand of specially designed single-stranded DNA is bent into its final form by adding short complementary oligonucleotide strands to precisely fold a long strand of nucleic acid. DNA architects are working on origami designs that orient enzymes in positions that are bioactive, sense changes in a cell’s environment, detect single nucleotide polymorphisms, or deliver drugs directly to the therapeutic site. Definitely Tony-contender material.

But then there is RNA to consider. Originally, its various forms (mRNA, tRNA, and ribosomal RNA) seemed more or less relegated to ensemble roles involved in the choreography of protein production. But RNA has also played starring roles in the origin of life: various forms of the nucleic acid took center stage long before DNA arrived on the scene. Lately, though, it’s making a stellar career comeback: genome sequencers and molecular biology sleuths seem to announce new RNA types and vital roles for them on a remarkably frequent basis. (See “The RNA Age: A Primer,” The Scientist, May 11, 2017.)

Circular RNA is the latest form to set tongues wagging, as Catherine Offord reports in “Uncovering the Functions of Circular RNAs.” First considered mistakes or “noise,” circRNAs are now suspected to be important cellular components. They consist of one or more protein-coding exons (and sometimes the odd intron) that form a circle. It turns out cells contain lots and lots of them, and some are even translated into proteins in vivo. But like any ingénue, circRNAs are still cloaked in mystery. One researcher interviewed says, “We’re really just at the beginning of an exciting journey. It doesn’t hap­pen often in molecular biology that you find such a fundamentally new phenomenon.”

Although they appear in every issue, DNA, RNA, and proteins elicit bravos in this July/August issue of The Scientist. And because they all play such interesting roles, I’d be a really lousy Tony judge . . .