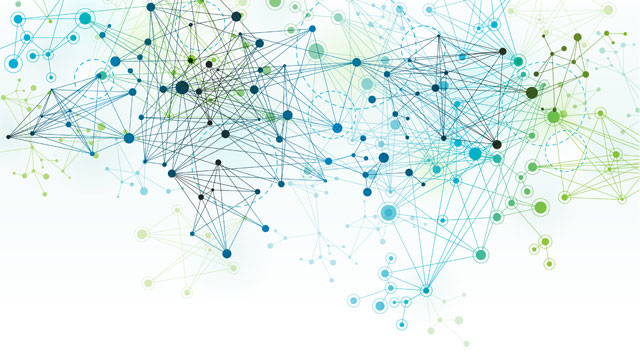 Maybe it’s because I’m a New Yorker, but when I marvel about the interrelatedness of life, I often can’t help hearing in my head the punch line of an ad jingle that was wildly popular around here in the 1990s: “We’re all connected . . . New York Telephone.” That telecommunications company has since evolved almost beyond recognition in response to economic and technological climate change, but the jingle stuck, to the point that uttering “We’re all connected” in any context is still enough to elicit the rejoinder, “New York Telephone.”

And I kept hearing it as we were putting the finishing touches on this issue of The Scientist. All three of May’s features are about connection, albeit occurring across different distances and using an amazing array of different communication strategies—in connective tissue, between microorganisms, and between an expectant mother and her unborn child.

When senior editor Bob Grant’s wife Kerry gave birth to their second child 5 weeks before term, they were stunned. “At some point during her pregnancy,” he writes, “a complicated cas­cade of signaling and chemical crosstalk short-circuited.” This most intimate of connections, where an essentially foreign entity—the fetus—is allowed to develop inside a woman’s body, was perturbed by some kind of molecular miscommunication. Ever the investigative journalist, Bob set out to report on what is known about the factors that instigate preterm birth, as well as labor and delivery in general. In his feature article “Why So Soon?,” Bob recounts that he was told over and over by researchers how surprisingly little is actually known about this process so vital to us, and he outlines the most plausible current models for the maintenance of pregnancy and the initiation of labor and birth. Arriving too soon kills more than a million of the 15 million premature babies born around the world each year, so understanding what causes this miscommunication cannot come soon enough.

Those same electrons that kept New York Telephone customers connected also work to facilitate energy transfer between bacteria. In “Live Wires” Mohamed El-Naggar and Steven Finkel recount the birth and development of electromicrobiology, a fascinating new field of research that explores the transmission of electrical signals between microbes. The authors describe how electrons move not only along thin hairs called pili that project from the cell bodies of certain bacteria, but also in the shared periplasmic space of long chains of thousands of linked bacteria, and from the membranes of several bacterial species to extracellular mineral surfaces. “This vision of integrated microbial circuits was unimaginable 10 years ago,” the authors conclude. “But as we unravel the molecular and biophysical basis of long-distance electron transport, these bacteria may one day become essential components of everyday technologies.”

Yes, we are all connected—and always have been, long before we could phone a friend, eavesdrop on microbial and molecular crosstalk, or begin to know how to strengthen and secure our most precious natural bonds. 