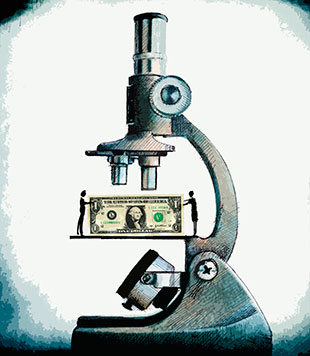 © GARY WATERS/IKON IMAGES/CORBISCompensation for life sciences professionals in the U.S., Canada, and Europe increased moderately since 2013, according to The Scientist’s annual Salary Survey of the community. Some specialties, including genetics, genomics, and immunology, however, showed particularly notable increases.

Older data from the Bureau of Labor Statistics (BLS) revealed that industry and academic salaries in the life sciences tend to grow at a relatively slow pace. Comparing salary information gathered in May 2008 to the most recent BLS data collected in May 2013, Saranna Thornton, an economist at Hampden–Sydney College in Virginia and chair of the committee on the Economic Status of the Profession at the American Association of University Professors (AAUP), found that while positions in chemistry, physics, and computer science received pay increases of 8.3 percent to 10.6 percent over the five-year period, the life sciences saw the smallest increases. Industry biochemists and...

In addition to differences across specialties, the most recent results from The Scientist’s sal­ary survey revealed varying incomes between researchers in industry and those in academia, between men and women, and for academics working in different countries. Life scientists working in the U.S., for example, earned an average of $99,011, while their European counterparts averaged just $68,361; and around the world, a gender gap in salaries is still apparent, with women earning less than men in the same positions, on average.

Of course, money isn’t everything. Across sectors, other benefits—ranging from intellectual freedom to stock options—continue to remain important factors in individual choices of professions. “Salary is a very important component, of course, but it’s only one of the elements that most companies [consider] when determining compensation,” says David Knopping of the compensation consulting firm Radford. 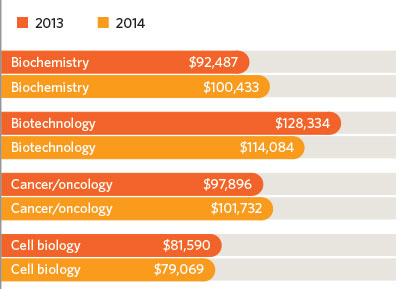 AVERAGE COMPENSATION IN U.S.
See full graph here.Across 15 specializations in the U.S., the highest-paying fields in 2014 remained the same as those in 2013: pharmacology, biotechnology, and drug development and discovery. But salaries for professionals in drug discovery did not change significantly, while scientists working in pharmacology and biotechnology reported decreases in overall compensation of 8 and 11 percent respectively, compared with The Scientist’s 2013 data. Microbiologists, molecular biologists, and cell biologists reported almost no change in their income compared to the previous year. On the other hand, researchers working in genetics, genomics, and immunology reported incomes 10 to 13 percent higher in 2014 than in 2013.

Such increases may reflect the high demand for people trained in key areas of genetics and genomics, such as genetic counseling, bioanalytics, and data analysis, says Knopping. “Outside of clinical fields, biostatistics tends to be another hot area,” he adds. 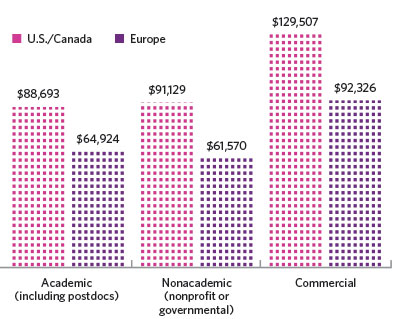 AVERAGE COMPENSATIONLife scientists in industry in the U.S. and Canada earned an average income of $129,507 in 2014, while those in Europe reported receiving an average of $92,326. According to Thornton, one reason for the continental income gap in industry could be the focus on long-term employment stability rather than immediate salary benefits. “There’s generally a bigger commitment to job security in Europe,” she says. “In the U.S., there’s less of that, so one of the trade-offs is that you get a higher salary but less job security.”

Whether in the U.S., Canada, or Europe, academic scientists responding to our survey earned approximately 30 percent less than their peers in industry. A comparison of academics’ purchasing power—what they could afford on their income in a given country—revealed a similar trend. “Through the world, in no country at all among the 28 we studied do academics get paid on a similar scale to people with similar qualifications who are in other sectors of society,” says Boston College’s Philip Altbach, who studies trends in higher-education incomes.

Because academic incomes don’t typically measure up to other sectors, those aspiring to remain within the ivory tower often move to countries with less of a pay gap. As a result, “countries with especially poor academic salaries are going to suffer a brain drain from universities,” says Altbach. “This will eventually affect other sectors within the economy.” 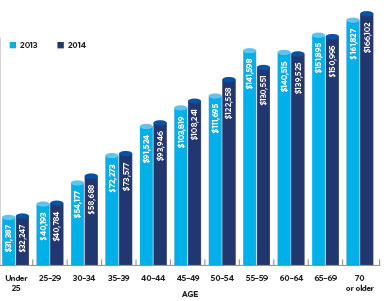 AVERAGE COMPENSATION IN U.S.
See more graphs here.Age—and the corresponding increases in qualifications and experience that come with it—translates into tangible financial benefits, The Scientist’s survey results suggest. In the U.S., life scientists received a pay increase of approximately 20 percent every five years above the age of 25. The jump between the incomes of 35- to 39-year-old US life scientists ($73,577) and those of their 40- to 44-year-old colleagues ($93,946) illustrates this point, with a dramatic $20,369 increase. Survey respondents crossed the six-figure salary mark at ages 45 to 49, with an average income of $108,241 in this age group.

These data seem “totally consistent” with other reports, says Thornton. “If someone gets a PhD in economics or finance and goes into academia, they go directly from their degree into an assistant professor job,” she explained, “whereas in life sciences it’s normal to go from a PhD to a postdoc position first. It’s delayed, but they ultimately reach the higher salaries.”

See full graphic here.Unequal pay for men and women doing the same work is not a problem unique to US life scientists. The Scientist’s data, gathered from countries across the globe, reveal a pervasive discrepancy in the salaries men and women take home, as women’s incomes worldwide ranged from 75 to 99 percent of the paychecks earned by their male counterparts. The discrepancy was not consistent around the world, however. The greatest gender gaps appear in salary data from the U.S. and Canada, while data submitted by life scientists in Latin America and Asia revealed relatively small differences in overall compensation between men and women.

“On the face of it, earnings are higher in the U.S.,” says Ariane Hegewisch of the Institute for Women’s Policy Research, a US nonprofit think tank, “and the wage gap is higher”—likely as a result of a lack of transparency about expected salaries for specific positions, and because women are less likely to work in the highest-earning positions. “That makes sense to me,” Hegewisch says, “but [the results from] Latin America and Asia are a little more surprising.”

While women and men at early- and mid-career stages in the U.S. received nearly equal pay, women professors only received 88 percent of the income male professors did.

Looking more closely at the data for US academics, however, reveals that this gender gap is only found in high-ranking positions. (See graphs at far right.) While women and men at early- and mid-career stages—from graduate student to associate professor—received nearly equal pay, women professors only received 88 percent of the income male professors did. And because more men hold these high-ranking positions, the overall pay gap in the U.S. is magnified.

Thornton notes that better enforcement of the Title IX amendment, which ensures that federally funded education programs’ pay scales do not discriminate based on gender, is a growing resource that women in academia can use. “Colleges and universities are ramping up to make sure that Title IX is properly enforced on their campuses,” she says. “Federal funding agencies including NASA, NSF, and the NIH are all taking the lead in auditing the institutions they give grants to.”