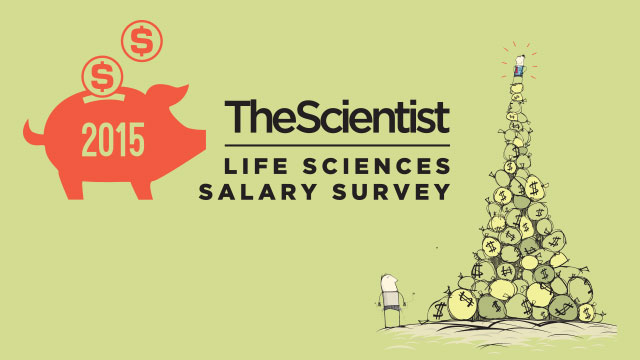 In the life sciences, having a PhD continues to pay. And according to The Scientist’s 2015 Salary Survey, your chances of being well compensated also increase if you are employed as a full professor in academia; specialize in biotechnology or clinical research; work in industry; have a job in the U.S.; or are male. Each of these populations reported the largest average salaries this year. The highest-paid respondents, earning an average annual income of $198,746, were those holding medical doctorates. Conversely, the lowest-paid group was female professionals reporting from Latin America, who earn just $22,091 on average. In the U.S., the lowest salaries were earned by respondents under age 25—$34,716.

Since 2014, most average salaries in The Scientist’s annual survey have increased, with some rocketing up more than others. The greatest jumps were seen in biotechnology and clinical research, two areas that also led... 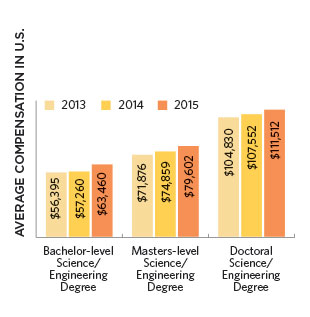 In the U.S., compensation for life-science researchers continues to rebound from the dips seen after the 2008 economic recession. “Faculty salaries got hit,” says Martin Finkelstein, a professor in the department of education leadership, management, and policy at Seton Hall University in New Jersey. “A lot of places did not provide any raises at all for three, four, five years.” With a few exceptions, this year’s survey showed an increase in average earnings over last year across most academic levels, fields, and sectors surveyed.

In industry, “the market is so hot right now, and employees have choices,” says Robert Surdel, a partner at the San Jose–based compensation consulting firm Radford. Many startup companies have seen an infusion of capital, for example, and with that comes increased competition for talent, he says. In contrast to just a few years ago, “it’s not the situation where they feel like they’re lucky to have a job. That sense is gone.” —K.Z. 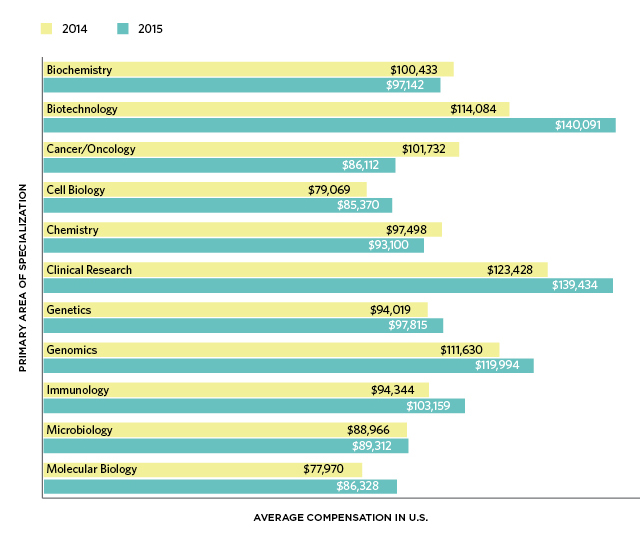 Across areas of specialization, one of the largest increases from The Scientist’s 2014 Salary Survey data is in biotechnology, where average salaries increased from $114,084 last year to $140,091 in 2015. “The biotech market is probably up 400 percent since 2011,” says Surdel. He adds that biostatistics is another fast-moving job area, as companies start capitalizing on large data sets and technology-enabled science. Other high-paying fields in this year’s survey are clinical research ($139,434) and genomics ($119,994). Cancer biology is one of the few areas across sectors where earnings decreased. For reasons that are unclear, average salaries dropped to $86,112 from 2014’s average of $101,732. —K.Z. 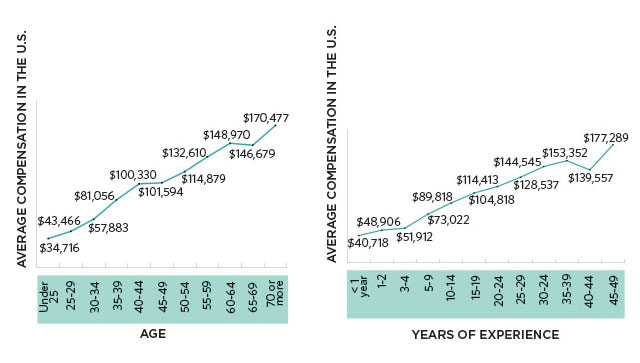 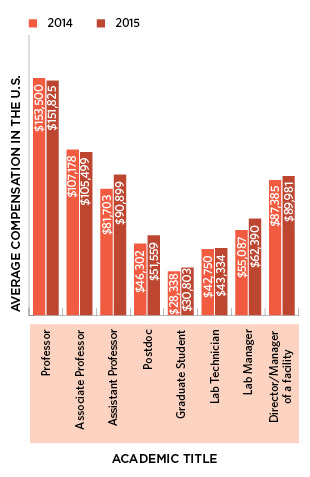 Life-science professionals in the U.S. and Canada earned more, on average, than their counterparts in Europe, Asia, Oceania, and Latin America. The average income reported by US/Canadian respondents was $100,722, a stark contrast to Latin America’s $29,290, with other regions falling in between. Average 2015 salaries in Asia, compared with the data collected in 2014, increased by more than $22,000—up to $67,027. The leap is largely due to a reported increase in Japanese salaries—which averaged a whopping $311,789 this year, compared with $66,047 in 2014—though The Scientist received only seven responses from the country each year. —K.Z.

European respondents had an average income of $58,686—some $40,000 less than salaries reported for the U.S. and Canada. This wide margin holds true across the academic, industry, and government sectors. For academic researchers, the difference may largely be due to the required pay scales in European countries. Full professors at European institutions, for instance, usually earn similar salaries regardless of whether they specialize in biomedical engineering or German literature, according to Finkelstein. “In most of the rest of the world, academic compensation is not much of a matter of discussion. Whatever it is, it’s the same for everybody,” he says.

A larger gap between US/Canadian and European life scientists exists in the commercial sector, however. Industry professionals in the U.S. and Canada earn $47,664 more, on average, than their counterparts in Europe. Surdel partly attributes the difference to overall compensation packages that may not be not included in the figures reported in The Scientist’s survey. “A lot of these countries, particularly in Europe, have a lot of additional programs that have bigger pensions or other benefits that are significant.” For employers seeking to attract talent, Surdel adds, “there are also different competitive market dynamics, internationally. It’s not quite as aggressive [as in the U.S.]—there are different levels of commitment.”

But both in the U.S./Canada and in Europe, biotech and pharma companies offer life-science professionals higher compensation than academia, nonprofits, or the government—a trend that echoes The Scientist’s previous salary surveys. In these regions of the world, life scientists working in industry earn an average of $30,000 to $40,000 more than academics, though this average includes postdoctoral appointments in academia, which pay significantly less than other PhD-level positions. With such disparate earnings, the draw toward an academic career is often more about research freedom and advancing the mission and values of an educational or research institution. But it’s a tough decision for early-career PhDs, says Surdel. “If they want to go into industry, they can close that 30 to 40 percent gap pretty quickly.” —K.Z. 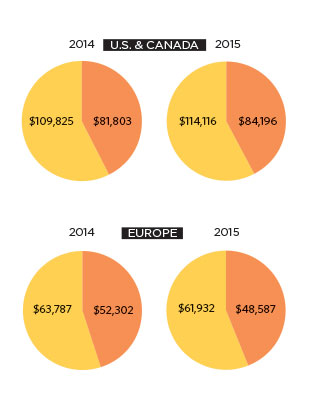 Internationally, the gender disparity in earnings remains striking. The gap between men’s and women’s average salaries in the U.S. and Canada, for example, is nearly $30,000, with women earning only 74 percent of what men do. In Europe, women in the life sciences still earn some $13,000 less than men, or 78 percent of men’s average salaries. These discrepancies stem, in large part, from the numbers of men and women at different academic ranks: women tend to be disproportionately represented as instructors and lecturers, according to Finkelstein. “In terms of growth, where women do better than men, most of that is in the part-time, non–tenure track positions,” he says. There are also differences in the numbers of men and women in different life-science fields, which may contribute to overall gender disparities in salary, he adds. But studies of academic salaries suggest that the disparity remains even when controlling for these factors.

The gender gap is particularly apparent in faculty start-up packages, says Carrie Byington, a professor of pediatrics and associate vice president for faculty and academic affairs at the University of Utah. “The negotiation of a start-up package is an important function that happens at the time of hiring, and many times, someone as a young faculty member relies on their mentor to help them navigate that negotiation. If women don’t have mentors, then they’re really at a disadvantage,” says Byington, who coauthored a recent editorial on this topic in JAMA. (See “Let’s Make a Deal,” The Scientist, February 2013.)

Byington argues for transparency and structured mentorship programs, having implemented the latter in her department in 2007. “Before I started the program, only 10 percent of early-career, grant-funded investigators were women. After we started the program and had this two-year mentoring program for everyone, 55 percent of grant-funded investigators were women,” she says. “It was easier [for women] to come into a program than approach a man one-on-one to be their mentor.” In 2013, Byington’s program expanded to all of the university’s departments and colleges in the health sciences. While closing the gender gap is not an overnight process, structured programs and transparency can raise awareness of the disparities and help mitigate them, she says. —K.Z. 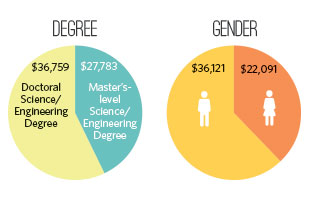 Data are displayed as average compensation in US dollars.

This year’s survey yielded our largest response yet from several Latin American countries, with 162 completed questionnaires coming from Chile alone. “In Chile, scientific research is currently in a growing phase, and there is a general interest amongst young scientists to start their own laboratories,” Andrés OspinaÁlvarez, a postdoctoral researcher at the Center for Marine Conservation in Chile, wrote in an email to The Scientist. Government funding for PhD students and postdocs is meeting demand, he adds, and salaries for public researcher positions seem to be on par with jobs offered by the private sector.

But in Venezuela, which only contributed 13 responses to this year’s survey, the situation is not so bright. “There were several years of decent allotments of dollars for reagents and equipment from 2006–2011, but the high inflation rate of the local currency has progressively eroded the wages of government workers, especially in the science and university sectors,” one Venezuelan researcher, who asked to remain anonymous, wrote in an email to The Scientist. Publicly funded scientists also took a hit when oil prices dropped precipitously in 2014; much of the government’s budget comes from the country’s nationalized petroleum company.

In Chile, scientific research is currently in a growing phase, and there is a general interest amongst young scien­tists to start their own laboratories.—Andrés Ospina-Álvarez,
Center for Marine Conservation

According to our survey results, females in Latin America make on average about USD $14,000 less (61 percent) than males in the region. Ospina-Álvarez says that, at least in Chile, this gap may have more to do with which jobs are open to women than with men and women in comparable roles earning different salaries. “The greatest gap between men and women in research is regarding access to research positions,” he says. “Male researchers are favored over female colleagues. Likewise, there is gender discrimination in the most influential positions in academia, and also in the private and public sectors.”

The biggest bottleneck for Chilean scientists, however, is getting a bachelor’s degree in science, which requires an in-depth research project and oral defense that often adds a year to the typical undergraduate experience. The research enterprise may also be missing out on a lot of talent because the average Chilean citizen finds it too expensive to attend the country’s colleges. —Amanda  B. Keener