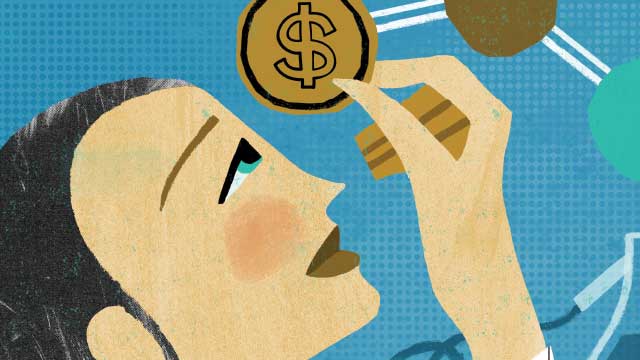 As part of this year’s Life Science Salary Survey, more than 2,500 life science professionals from around the world answered our questions about their job status, compensation, feelings of job satisfaction and security, the inclusion of women and minorities in their workplace, and more. The survey results are in, and highlight some intriguing trends in workplace culture and income across sector, specialty, rank, and gender. 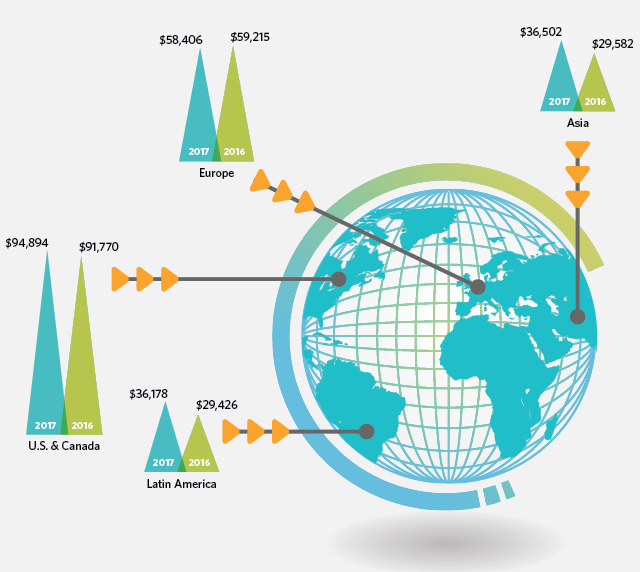 In line with last year’s survey results, scientists and life science professionals living in the U.S. and Canada are the highest paid out of scientists from all the countries we surveyed, making an average of $94,894 per year—anywhere from $36,000 to nearly $60,000 more than average salaries reported from Europe, Asia, and Latin America.

This year, European salaries come in second, and Asia and Latin America trail far behind (though they’re gaining ground, as compared with last... 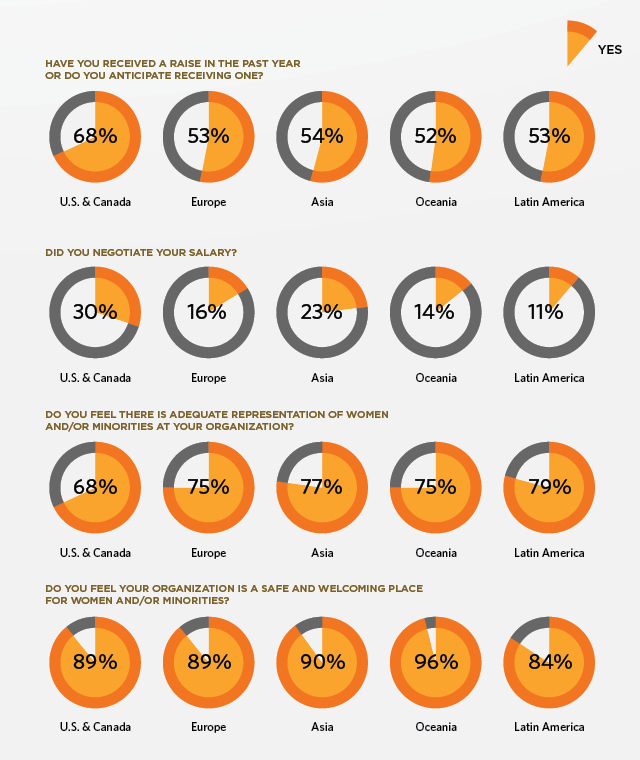 
ON INDUSTRY AND THE IVORY TOWER

US academic respondents to The Scientist’s survey report salaries consistent with last year’s. Also consistent with last year’s data is the considerable bump in average yearly wages from associate professor to professor—almost a $50,000 difference. Bargaining power is relatively low until one reaches a certain level of seniority, says labor economist Michael Roach of Cornell University.

AVERAGE COMPENSATION IN US ACADEMIA

Averaging across different positions within sectors, industry professionals make more than other life scientists in the U.S., pulling in $125,936 per year, compared with the $86,021 of academics and $97, 525 of those in other sectors such as government. “I’ve seen even higher wages [in industry] than what’s been reported in this recent survey,” says Roach, referring to his own data that are yet to be published. In his surveys, he and colleagues home in on the private sector, examining wage differences between big companies and start-ups, for instance. His data, however, include PhD students from chemistry, physics, and engineering, in addition to the life sciences.

AVERAGE COMPENSATION IN U.S. BY SECTOR

But regardless of field, industry salaries are higher. “It’s always been that way,” says Roach. He’s not aware of any systematic analysis probing the primary drivers of such differences in pay scale, but believes there could be multiple forces at play. For starters, in academia, “there’s a high demand for faculty positions,” he explains, driven by the flood of applicants and the lack of available jobs. This environment is highly competitive, and universities have the advantage. “If people try to make demands for very high salaries, then universities will go on to the next most able person,” he says. “They’re really not going to give in. . . . This helps keep wages from getting too big.”

But the lower salaries aren’t necessarily a turn-off for most faculty candidates, Roach adds. “The stereotype is that faculty are not in it for the money. A lot of people get into science and graduate research out of a love of science.”

On the industry side, however, the demand for candidates is greater. “There’s a lot of competition in the private sector for highly trained STEM workers, especially PhDs, which drives down the unemployment rate and drives high salaries,” Roach explains. In addition to higher salaries, PhDs in the private sector also enjoy lower unemployment, according to his unpublished data.

There were far more male than female respondents within senior levels in US academia, especially amongst full professors, which, according to economist Shulamit Kahn of Boston University’s Questrom School of Business, reflects a larger trend. “There are a ton more men at the full-professor level,” she says. 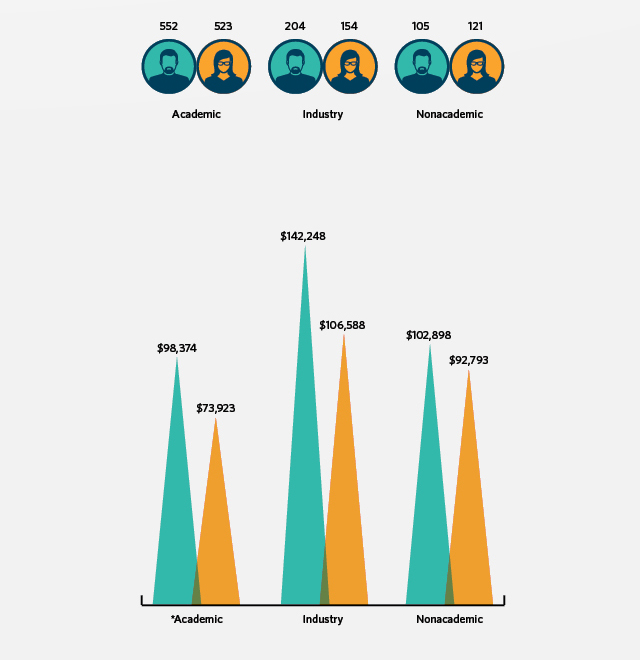 NUMBER OF US RESPONDENTS & AVERAGE COMPENSATION IN U.S.*Note: The gender gap in academia is greatly diminished when the data are broken down by position. See graph below.

Roach agrees and says that the difference in the number of male and female respondents is unlikely to be due to a response bias. “I think that there are a lot fewer women at the full-professor rank. . . . It’s not at all surprising that you see more equality in the lower ranks.” For instance, in the U.S. the number of respondents is well-matched by gender among less-senior academics, such as graduate students, postdocs, and even assistant professors.

He cautions against interpreting these data to mean that there are forces that “favor men and push women out,” however. He adds that he believes this discrepancy is improving, noting that greater gender equality within lower academic ranks in The Scientist’s survey results should eventually translate to more-equal numbers at the senior level. “The practices around recruiting graduates, mentoring graduates, and hiring graduates have changed over time, to where we do have greater equality now than we did 20 years ago,” says Roach. “Come back and do this 10–15 years from now, and I would expect that the number of full professors could be very equal as well.”

The Center for Science, Technology & Economic Policy Director Donna Ginther agrees. “There are more male professors in the senior ranks because women were less likely to obtain PhDs 20–30 years ago,” she writes in an email to The Scientist.

Gender differences in salary also appear to be improving. In a soon-to-be-published study, Kahn says she and her colleagues found a roughly 17 percent difference in pay between men and women in the sciences. But, she says, most of those salary differences were accounted for by a variety of factors, including pay gaps by sector. For instance, those who work in industry get paid more, and in general, there are fewer women in industry.

However, Roach notes women working in industry tend to make less money than men. “We see significant differences in wages between men and women in the surveys that we do.” In his recent survey of industry scientists, “men still make significantly more than women.”

According to Ginther, a similar gap doesn’t exist for academia. Her previous data “showed no evidence of a gender salary gap in academia in biomedical fields,” she writes (Psychol Sci Public Interest, 15:75-141, 2014). Indeed, when broken down by rank, The Scientist’s data showed very little difference between the salaries of men and women in US academia, with female full professors averaging less than $1,500 less than their male counterparts. Gender differences in pay scale become much smaller “if you start comparing apples to apples,” says Kahn, who has seen similar trends in her own data. 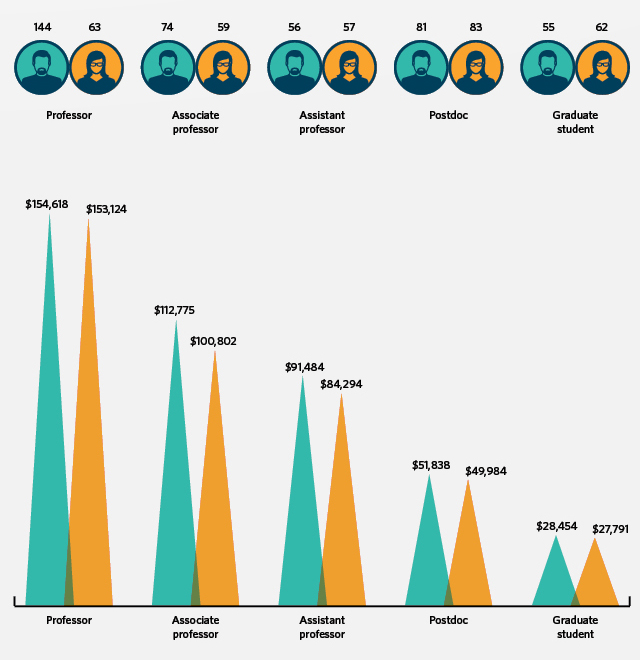 NUMBER OF US RESPONDENTS & AVERAGE COMPENSATION IN U.S.

IF YOU’RE HAPPY AND YOU KNOW IT

Respondents to The Scientist’s survey also rated their feelings of satisfaction and security in their current roles and salaries. And around the globe, responses varied widely. 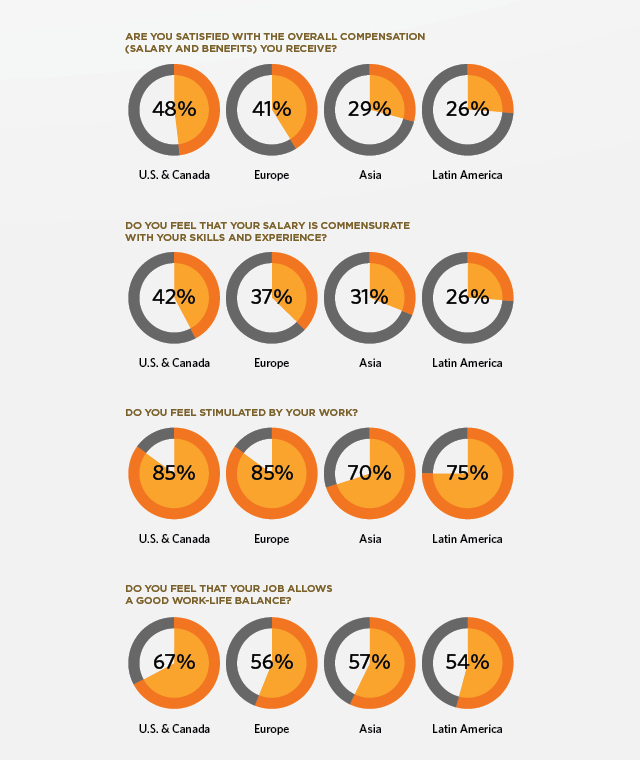 Overall, no region’s scientists reported high satisfaction with their compensation. In the U.S. and Canada, 47 percent of respondents said they were satisfied with their wages, and only 41 percent felt that their skills and experience matched their salaries, suggesting that more than half of life scientists in North America feel underpaid. And those numbers were even lower in Europe, Asia, and Latin America. But that doesn’t necessarily mean that these life scientists are unhappy.

According to Roach, there are “nonfinancial work factors that drive work satisfaction.” From the hundreds of interviews Roach has conducted with respondents to his own surveys, one thing that stands out as a primary driver of job satisfaction is the freedom to satisfy one’s research goals and interests. “We see in our research that salary is not typically a driving factor, as it might be in other kinds of careers.” In the U.S. and Canada, nearly 85 percent of respondents reported feeling stimulated in their current roles, suggesting that a large majority experience intellectual gratification.

“Intellectual challenge and a fit and interest with the type of work that you’re doing is typically pretty important,” says Roach. “It’s really much more [about] doing exciting and interesting things.”