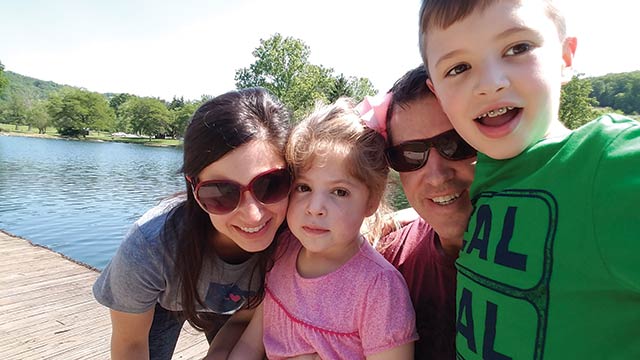 THE O’NEILLS: Eliza and her family in West VirginiaTHE O’NEILL FAMILY

When Eliza O’Neill was 3 years old, her parents, Glenn and Cara, noted that her development began to diverge from that of her peers. Their once fast-learning, gregarious child faced difficulties in school, and her improvements in areas such as social communication and speech began to slow. It took about six months and multiple visits to the doctor for Eliza to be diagnosed with Sanfilippo syndrome, a rare lysosomal storage disease in which sugar molecules called glycosaminoglycans build up in the central nervous system, destroying cells and eventually causing severe dementia, seizures, and a loss of mobility. The disease strikes between 1 and 9 out of 1,000,000 people, and most children affected do not survive beyond their teens. The diagnosis, which Eliza’s doctors made in July 2013, was like “a lightning bolt out of the sky,” Glenn...

In the weeks following Eliza’s diagnosis, the O’Neills combed the scientific literature looking for a way to save their daughter. Their research led them to a potential gene therapy for Sanfilippo under investigation at Nationwide Children’s Hospital (NCH) in Columbus, Ohio. At the time, the work was still in the preclinical stage, but “the data were amazing,” says Cara, a pediatrician. Once she found this study, she contacted Haiyan Fu, a scientist at NCH’s Center for Gene Therapy working on the experiments, who walked her through the research. “That was the first moment that I had a real solid hope in the science,” Cara recalls.

Fu’s work on Sanfilippo had begun in the late 1990s, during her postdoctoral studies at the University of North Carolina at Chapel Hill. Her initial focus was on Sanfilippo type B, and her project was supported by the Children’s Medical Research Foundation, which was established by the Wilsons, a family in Illinois whose daughter was born with the disease. Sanfilippo, which is caused by the loss of an enzyme needed to break down glycosaminoglycans, has four subtypes, A–D, each with a different enzyme deficiency and unique genetic mutations. Fu tells The Scientist that she and her colleagues thought that “if we could deliver [the missing] gene where it’s supposed to be, we wouldn’t have to treat 100 percent of cells—we could treat some cells, [and those could] provide other cells with the secreted protein.”

I didn’t even know that a disease as terrible as this could even exist.

A handful of patient foundations supported the research for more than a decade, even after Fu moved to NCH and began working with another researcher, Douglas McCarty, to complete the preclinical work on a gene therapy for Sanfilippo types A and B. Although still in the preclinical stages when the O’Neills contacted Fu, it was the only research effort that looked like it would be able to treat Eliza, who has Sanfilippo type A, in time, Glenn says. But much more money was needed to start a clinical trial—which often costs in the millions of dollars to initiate.

To help raise funds, the O’Neills established the Cure Sanfilippo Foundation (Cure SFF) in 2014. While they hoped their daughter would be chosen for the study, Glenn explains, their primary purpose was simply to help get the clinical trial up and running. After raising $250,000 over the first six months, the pair realized that they needed a way to raise much more money, quickly—and decided to try making a viral video. So they reached out to Karen Cheng, a videographer in California, for advice. To their surprise, she contacted a colleague, Canadian photographer Benjamin Von Wong, who travelled to the O’Neills’ home and shot a short film that went live on a GoFundMe page in April 2014. By the end of the year, the campaign had raised a whopping $2 million.

In 2016, the research team at NCH received investigational new drug (IND) approvals from the FDA to start testing the treatments, which involve an intravenous injection of an adeno-associated viral vector that is able to cross the blood-brain barrier, carrying the gene encoding a replacement N-sulfoglucosamine sulfohydrolase (SGSH) enzyme. This delivers the treatment throughout the body, allowing SGSH to be produced both in the central nervous system—the main target—and in other organs, such as the liver, that are also affected by the disease. Shortly after, the INDs were transferred to Texas-based Abeona Therapeutics, which sponsored two Phase 1/2 clinical trials, one for Sanfilippo A that began in 2016, and another for Sanfilippo B that started late last year. Both are being conducted by another group of investigators, led by NCH’s Kevin Flanigan.

A group of 12 foundations, including Cure SFF, granted Abeona the funds to develop those therapies. Other funds raised by Cure SFF—more than $5 million in total—have financed a variety of Sanfilippo-focused investigations around the world. Nowadays, the O’Neills are not alone: more than 50 families have joined their foundation’s fundraising efforts. Their ultimate goal, Glenn says, is to have routine newborn screening and a proven treatment within the next 10 years. Because the gradual buildup of glycosaminoglycan worsens symptoms, he adds, the sooner the disease is caught and treated, the better.

“I think patient foundations play a critical role as a catalyst for research for rare diseases,” Flanigan says. But he notes that helping fund a treatment does not guarantee enrollment in a clinical trial.

Eliza, however, was a good candidate for one of the Abeona trials, and in 2016, at age six, she finally received the gene therapy. “She was the first child in the world treated with this—she was pretty progressed in the disease, but we were very lucky, blessed, and thrilled that she was even getting a chance,” Glenn says.

According to the latest results from the Abeona-sponsored trial of the Sanfilippo A treatment, presented this February at the WORLD Symposium for Lysosomal Diseases, 10 patients have been treated, and investigators have seen a significant reduction in glycosaminoglycan buildup in cerebral spinal fluid and urine, as well as some evidence of cognitive improvement six months after treatment. “We have, most importantly, no evidence of systemic toxicity with delivery,” Flanigan says. “We’re very optimistic about it.”

The results look promising, but they are preliminary, says Kim Hemsley, a neuroscientist who studies Sanfilippo at the South Australian Health and Medical Research Institute but is not involved in the Abeona study. “The true test of [gene therapies] will come with time.”

Hemsley, who has also received support from patient foundations for her work on Sanfilippo, says “the real unsung heroes” of our society are the families who fundraise for this work. “Not only are they having a quite extraordinary battle in their own life with a devastating disease in their family, but they still find the strength to advocate, to raise funds, to talk to clinicians and researchers around the world to try to establish research programs that have eventually led to the trials that are ongoing today,” she adds.

As for Eliza, the O’Neills say that her symptoms don’t appear to have worsened since her treatment. And although she has not regained her speech, which she had completely lost, the family has found other ways to connect, such as through eye contact, music, and TV shows. “I’d say with Eliza, we’re in this uncharted territory where her future is unknown and uncertain,” Glenn says. “And that’s a good thing for Sanfilippo, because if your child is not treated, their future is certain, and it’s not good.”