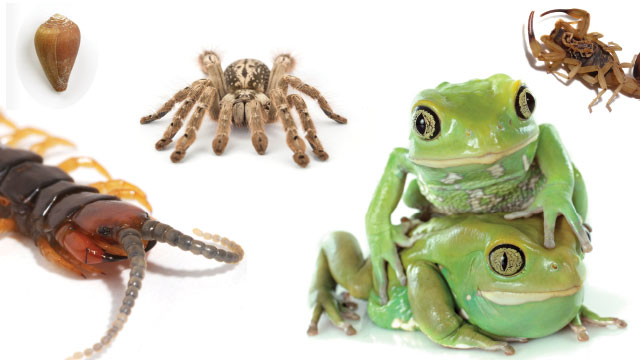 Beyond the usual suspects of snakes, spiders, and scorpions, the animal kingdom is filled with noxious critters: snails, frogs, fish, anemones, and more make toxins for defense or predation. The noxious chemicals these animals produce are potent, and they often strike where it hurts: pain pathways. These compounds have long captivated researchers hoping to understand their effects and use that knowledge to develop drugs that suppress pain in a wide variety of ailments affecting humans.

Paradoxically, some of these toxins are themselves analgesic, and researchers have worked to develop synthetic derivatives that can be tested as painkillers. Such is the case for the only toxin-derived analgesic to be approved by the US Food and Drug Administration (FDA): ziconotide (Prialt), a compound 1,000 times...

Despite more than half a century of research in this field, however, scientists have had a frustrating time developing effective analgesics. Challenges include ensuring that the drugs are highly specific to their targets—each family of ion channels involved in pain sensing in humans contains several conserved proteins—and getting them to those targets, which often lie beyond the blood-brain barrier in the central nervous system. Nevertheless, several toxin-derived candidates are beginning to prove their worth in preclinical experiments and a handful of clinical trials, and bioprospectors continue to mine the animal kingdom’s vast library of venoms and poisons for more leads. The next big thing in painkillers could soon be slithering, creeping, hopping, or swimming into the pipeline.