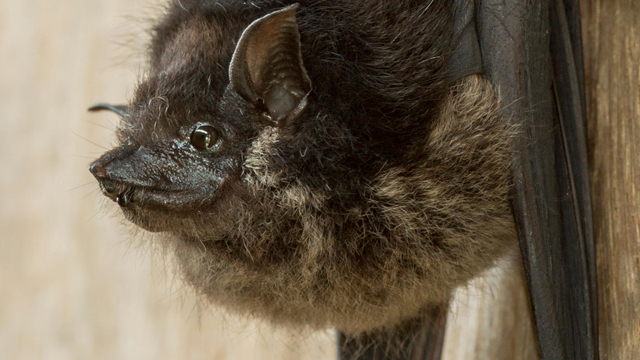 In the past decade, some bat species have been added to the ranks of “singing” animals, with complex, mostly ultrasonic vocalizations that, when slowed down, rival the tunes of some songbirds. Like birds, bats broadcast chirps, warbles, and trills to attract mates and defend territories. There are about 1,300 known bat species, and the social vocalizations of about 50 have been studied. Of those, researchers have shown that about 20 species seem to be singing, with songs that are differentiated from simpler calls by both their structural complexity and their function.

Bats don’t sound like birds to the naked ear; most singing species broadcast predominately in the ultrasonic range, undetectable by humans. And in contrast to the often lengthy songs of avian species, the flying mammals sing in repeated bursts of only a few hundred milliseconds. Researchers must first slow down the... 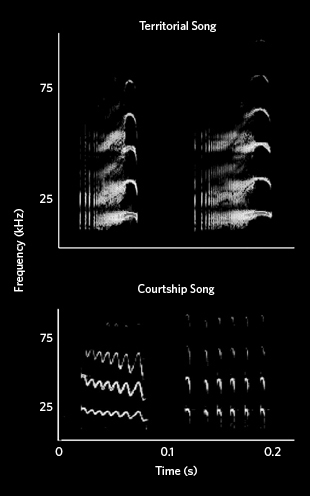 HIGH-FREQUENCY FEATS: The greater sac-winged bat (pictured above) sings to defend its territory (top) and to attract mates (bottom), among other things.COURTESY OF MIRJAM KNORNSCHILDThe neural circuitry used to learn and produce song may also share similarities between bats and birds. Bohn and Smotherman say they’ve gathered some tantalizing evidence that bats use some of the same brain regions—namely, the basal ganglia and prefrontal cortex—that birds rely upon to produce, process, and perhaps even learn songs. “We have an idea of how the neural circuits control vocalizing in the bats and how they might be adapted to produce song,” Smotherman says.

In an exception to supersonic inaudibility, at least one bat species does sing loud and proud: the greater sac-winged bat (Saccopteryx bilineata), which broadcasts audible territorial defense songs from roosts tucked away in the canopies of tropical rainforests. “You can hear these songs from over a hundred meters away,” says Mirjam Knörnschild, an animal behaviorist at the Free University of Berlin who studies the species in Costa Rica and Panama.

Greater sac-winged bats may even learn their songs in ways that mirror songbirds—and their pups “babble” the species’ vocal repertoire as do songbird chicks and human babies, Knörnschild has shown (Naturwissenschaften, 93:451-54, 2006). “The species I work with happens to learn its territorial songs by imitating tutors, which is very close to what a bird is doing,” she says. “There are fairly few species of bats well-described that sing, and even fewer that are capable of vocal learning. In that regard, Saccopteryx is the only one at present that is singing a song that is learned by vocal imitation.”

The emerging similarities between bats’ and birds’ songs may be tied to the fact that both types of animals engage in one of the most resource-intensive modes of locomotion: flying. “You can use singing to control your territory without flying,” which is energetically expensive, says Smotherman. “And singing works well to control fairly large territories for fairly small animals that fly. . . . There’s an important tie between singing and flight.”

Read about the rest of the animal chorus, including birds, rodents, amphibians, insects, whales, and fish, in “Song Around the Animal Kingdom.”