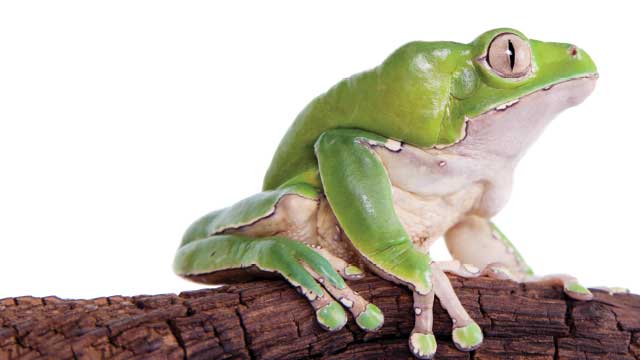 © ISTOCK.COM/FARINOSWhen the late organic chemist John Daly was on the hunt for poisonous frogs, he employed an unadvisable method: “It involved touching the frog, then sampling it on the tongue. If you got a burning sensation, then you knew this was a frog you ought to collect,” he once told a National Institutes of Health (NIH) newsletter writer. Daly survived to gather frogs from South America, Madagascar, Australia, and Thailand, and he extracted more than 500 compounds from their skin (many of which the frogs in turn had harvested from their insect diets). One of these compounds, the toxin epibatidine, turned out to have an analgesic effect 200 times more potent than morphine in rodents, Daly and his colleagues reported in 1992 (J Am Chem Soc, 114:3475-78, 1992); and rather than working through opioid receptors, epibatidine bound to nicotinic receptors.

But frogs may yet hold clues to killing pain. At least one frog does deploy an opioid: the waxy monkey tree frog (Phyllomedusa sauvagii), whose skin is laced with the peptide dermorphin. Although the compound does not appear to be a toxin that wards off predators, dermorphin has about 40 times the potency of morphine in a guinea-pig ileum assay, but it doesn’t effectively cross the blood-brain barrier, says pharmacologist Tony Yaksh of the University of California, San Diego. Dermorphin also boasts an unusual chemical property: the inclusion of a D-amino acid in its sequence. Almost all amino acids found in natural compounds are L-isomers, and dermorphin’s stereochemistry makes it resistant to metabolism and “certainly renders it more potent,” Yaksh writes in an email to The Scientist.

In the mid-1980s, Yaksh and Craig Stevens, now of Oklahoma State University, experimented with delivering dermorphin to rodents via the spinal cord; the researchers reported it was hundreds of times more potent than morphine delivered the same way. The drug was even delivered through the spine for some patients during postsurgical recovery in one study, but at the time, “it was hard to get people to think seriously about developing spinal drugs,” Yaksh says.

But interest in spinally delivered drugs has picked up in the past decade, he notes. Dosing opiates through an implanted spinal catheter would avoid many of the side effects associated with systemic use, he says, but repeatedly delivering morphine in this way has caused another complication: development of a mass called a granuloma at the injection site. Because it is more potent and requires less volume, dermorphin or an analog of the compound, such as [Dmt1]DALDA, may turn out to be better suited for this use, says Yaksh. He and a collaborator recently got a grant to further explore this possibility. Other researchers are now conducting animal studies for various kinds of pain with DALDA.